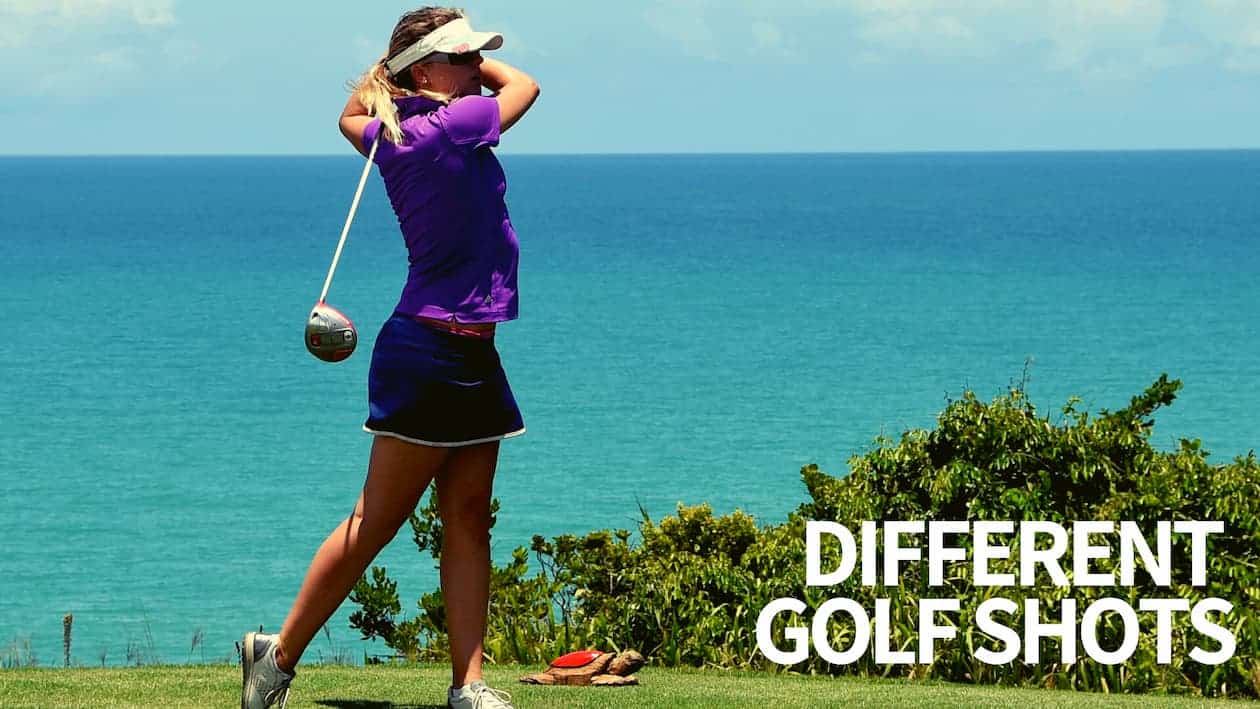 Types of Golf Shots – From Common to Rare

Golfers may face a plethora of shots during the course of a round. Some, like drives and putts, are common to every round. Others, such as a low “stinger” or plugged lie in a bunker are considerably rarer.

Let’s take a look at the different kinds of shots you will face, beginning with the most common way each round begins.

Most golf courses begin with a par 4. And many of those par 4 holes will require you to hit a driver off the tee. Not always, of course. Sometimes you only need a 3-wood or an even shorter club to get the desired results.

How do you determine which one to hit? It is best to play the hole backward in your mind. Think of where the pin is located on the green and where the best miss might be. If the pin is cut on the left side of the green and there is a deep bunker off to the left, you definitely want to favor the right side of the pin. If you happen to miss the green to the right, you will have more green to play with, leaving you with an easier path to par, or at least no worse than bogey.

With that knowledge in hand, you can then work your way back to the fairway. Where do you want your tee shot to end up to give you the best chance at hitting your target on the green? Then choose the club, whether a driver or not, that will put you in that nice position.

If you plan out and execute your drives well, it will leave you with an easier approach shot. One definition of an approach shot is any full shot that will allow you to hit the green. Hopefully, this will be a green in regulation, or one that will leave you with a birdie putt. On a par 5, that would mean your third shot, second shot on a par 4, and tee shot on a par 3.

Putts are shot hit with a club specially designed for that purpose, the aptly named putter. Depending on your lie, you might also hit a putt from just off the green.

The putter is the club you will use most often in any round and, as such, is the one on which you should spend the most practice time. Becoming a good putter is a quick way to reduce your score. While that is undoubtedly true, the holistic approach we prefer means each shot’s success rate is dependent in large part on the previous shot.

A good drive leaves you with an easier to pull off approach shot. And a quality approach shot means a shorter putt you are more likely to drain. They all work together. But putting is definitely important to your score.

What’s the difference between these two short shots generally made using some type of wedge? Distance. A chip shot is shorter than a pitch shot. How much shorter? There is no predetermined distance.

One way to think of it is this: a pitch shot is one that will fly farther than it rolls. The opposite is true for a chip shot.

Chip shots often require a putting-type motion, using very little to no wrist action. You need a pendulum-type swing, using a narrow stance and the ball positioned behind the center of your stance. Which club you use will depend on the shot you face. In general, it is a good idea to get the ball rolling as soon as possible.

You face a similar question when hitting a pitch shot. How far does the ball have to fly to avoid any obstacles and how much spin do I need to stop it where it is needed.

Like in a pitch shot, it is a good idea to stand with a slightly open stance. This prevents you from de-lofting the club and allows the club to do the work it is intended to do. As for ball position, it will be more forward in a pitch shot.

Practice using the same swing on all your pitch shots to be more consistent. Only change the club depending on the type of pitch needed, whether it is a low runner or a high and soft shot.

While you might use a 3-wood off the tee for your drives, here we are talking about a shot from the fairway. A 3-wood can come really make a difference in one particular instance. If you are a big hitter off the tee, or you are playing a short-ish par 5, you could find yourself going for the green in two.

If done well, that could result in an eagle attempt or at the very least, a sure birdie. Hitting one properly can be difficult for many players. It’s easy to want to sweep the ball off the ground and try to help the ball get airborne. This is a sure way to hit a “worm burner” that barely gets off the ground.

While your divot will be much shallower than with an iron, you still need to hit down on the ball and let the loft of the club get the ball up in the air.

While you should resist the urge to let your ego force you to try to pull off a shot you are not proficient in, length is definitely an advantage in golf. If you have it, use it.

Recovery shots come in a wide variety but you should always remember one thing after you hit a bad shot. Don’t make things worse. Still, you may find yourself in a position where you have little choice in the matter and need to use one of the following shots.

A flop shot is needed for a short chip shot with little green to work with. It is not usually possible to get much spin on the ball on such a short shot, meaning you need to use the softness of the shot to stop the ball. An open stance, an open club face, and lots of courage are needed to pull it off.

A draw is a ball that turns gently from right to left for right-handed golfers.

If the ball turns sharply in that direction, it is a hook.

Conversely, a fade turns from left to right (for righties; opposite for lefties) and a sharper turn in that direction is a slice. Obstacles that you cannot hit over or under could require one of these shots. Remember that a draw has a slight over spin and should roll further than a fade. Many golfers prefer a high fade as their go-to shot because it is easier to control.

If you find yourself with a side-hill lie, it is best to try to hit the shot with your shoulders parallel to the ground, although that is not always possible. A ball below your feet will tend to slice and a ball above your feet should hook. Plan accordingly.

Many golfers struggle in windy conditions. But a shot into the wind can be especially difficult. Keeping the ball low is key to success here. A shot with little spin helps a great deal. That means you must resist the urge to swing harder. Take an extra club or two, put the ball in the back of your stance, use a short backswing and an abbreviated follow-through, and keep your hands ahead of the ball through impact. As with any other shot, this one requires practice.

A shot from the rough can be awfully tricky, especially the thick stuff. Grass is likely to be between your club face and the ball at impact, meaning you will get much less spin than normal. High and thick grass can also grab the club face and twist it at impact. You need a descending blow to try to strike the ball first. Put your ego aside and concentrate on getting the ball back in play. A more lofted club is easier to hit out of the rough.

There are a wide variety of sand shots you could face. You could face an uphill or downhill lie or even the dreaded “fried-egg” or buried lie. As with shots from the rough, don’t be a hero. Get the ball back in play. From fairway bunkers with a good lie, you can take a normal swing but should put the ball back in your stance a bit so you strike the ball first. From a greenside bunker, you generally want to open your stance and your club face, then hit behind the ball about two inches. The goal is to have the ball land softly on the green.

One key for hitting almost any kind of golf shot is to stay within yourself. Don’t let your ego get in the way of scoring as well as possible. Take your medicine and accept a bogey to avoid the big numbers that kill your game.