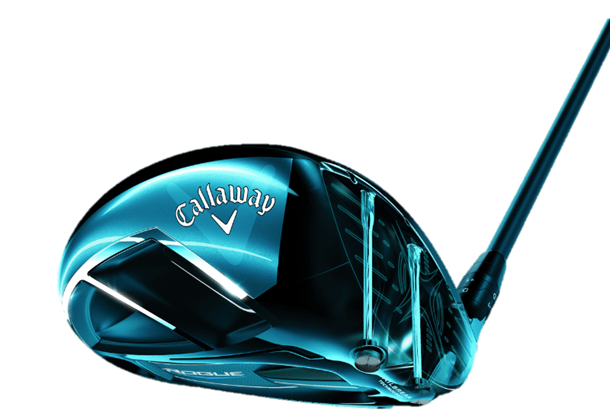 After the mind blowing release of the Callaway Epic Driver, the engineers went even further to come up with the ideal Callaway Rogue Driver. It does not replace the Epic Driver but is released for the players who require a greater level of forgiveness and playability. The best part is that the Rogue Driver comes with an enhanced jailbreak design, which includes bars that have an enhanced hourglass shape as compared to the Epic Driver. Due to the newly engineered technology and new design, this driver is 25 percent lighter than the Epic Driver.

The stiffening provided by the Callaway Rogue Driver is not seen in any of the drivers before. It provides a wider area which makes the face of the club head even more flexible. These drivers are constructed in compliance with Boeing; they are given a special aerodynamic shape which gives the user a very subtle control.

You can also invest in the Rogue Subzero version. This version is for the players who like their drivers a little heavy. The Subzero version has ports on the front and the back to accommodate 2 gm screw weights. The driver is made in a way that can fit with shafts that run from 40 gm to 80 gm. These shafts also include Quaranta, Project X, Aldila Synergy, as well as HZRDS Yellow. In this Callaway rogue driver review, we will show you all the shaft options available.

All versions of Callaway’s Rogue Drivers come under the category of Fairway Woods. These are the first Fairway Wood Drivers that use the jailbreak technology. The jailbreak rods have an hourglass structure and are made of stainless steel. These rods work in compliance with the cupface structure that is common in Callaway’s drivers. This synergy of the two technologies is what makes the ball gain speed and cover more distance.

Both the versions have the same size and their center of gravity is more forward as compared to the other Callaway drivers. Due to these features, the drivers are more forgiving and make the launch easy and convenient.

This version of Rogue Driver features the jailbreak effect which was introduced in the Epic Drivers, but its enhanced version is used in the standard Rogue Driver. The jailbreak bars in these drivers are lighter, but still, the crown impact and sole deflection impact have maximum impact.

The X-face design of the standard Rogue Driver provides an enhanced performance and improved flex speed as well. The shape improves the forgiveness and gives a larger footprint as well.

The Rogue Subzero driver is constructed to compliment the Rogue Standard Driver. Both come in the same price range. This is primarily constructed for players who prefer reduced spin rates and require tour caliber.

This version of the Rogue Driver comes with an improved version of jailbreak technology and an X-face which is common in both the Standard and Subzero versions. The main difference is in the weight and deep CG, which is present in the Subzero version. It gives more forgiveness and a neutral shot bias along with shaping versatility.

This version of Rogue Drivers also comes with a weights feature. There are two weights, 14 and 2 gm, that can be interchanged at the back and the front of the driver. This way you can either add or eliminate a 200 RPM spin to your driver.

This version of the Rogue Driver is designed in a way that produces a straighter ball flight and helps in fighting slices. They have a 5g-weight screw attached to the heel of this driver, which is the key to fight slicing. The result of this weight screw attached at the heel is an improved gear effect and location which gives better slice fighting skills. It has all the technologies that Rogue Standard Driver has which includes the jailbreak technology, X face, as well as the Boeing Aerodynamic design.

The features that make the Rogue Driver better than other drivers are:

The jailbreak effect is added to Rogue Drivers for an enhanced speed of the ball on impact. The jailbreak technologies, when combined with the X face technology of the driver, gives a high ball speed as well as makes it cover a long distance.

Originally Callaway’s engineers expected the design of Rogue Drivers to be larger, but after collaborating with Boeing they realized that the larger size will cause drag issues during the downswing. The understanding of the transitions from the face of the driver to the crown of the driver caused Callaway’s engineers to produce a driver with a generous yet soft radius. This causes the air to stay closer to the surface of the driver for a longer period that decreases the amount of drag.

Due to the less drag on the driver, the speed step has considerably increased as better airflow is promoted. This has also increased the head speed efficiency.


The carbon crown used in this driver is triaxial which is primarily for the improved value of MOI. Callaway has been a pioneer in the use of carbon in golf drivers. They have excelled in this technology which is why the crown of the rogue is approximately 63 percent lighter than the titanium crown of similar size. The best part is that the saved weight is used in a way that has improved the MOI of the driver and protected the speed of the ball as well as the distance.

The Rogue Driver consists of the largest concentration of carbon as compared to all the other Callaway drivers. The lightweight and increases strength has improved the MOI by a great deal.

You are given the choice to choose from 40, 50, or 60 gm weight shafts. The four options that you have are:

If Epic and Rogue are compared, it is seen that both are 460cc drivers, but due to the shape of Rogue, it is bigger than Epic. The stretched shape of rogue from its face to the back and from its tow to the heel makes it bigger and better than epic.

Some of the frequently asked questions by customers related to Rogue Drivers are:

As a company, Callaway definitely released Rogue to switch from Epic to Rogue due to the new technology used in it. Callaway has planned for Rogue to be used by all its professionals during the worldwide tours they make.

At the same time, the officials of Callaway say that Epic has its own place specifically in an environment where players want custom drivers made as they seek high fidelity.

In comparison to Epic, the technology used in Rogue is better. All the drivers of Rogue edition surpass the Epic Driver as they generate more speed and cause the ball to go to a higher distance. Moreover, the nature of Rogue Drivers is more forgiving as compared to the Epic Driver. There are no compromises made while constructing the Rogue Drivers and all the constraints were broken during the construction. The fitting of carbon crown and weight track is also made custom fitting friendly.

Is the Callaway Rogue better than the new Taylormade M4?

We think the new Callaway Rogue driver is definitely a match for the new Taylormade M4, They are both at the top end of drivers in 2018. Please consider both options before purchasing.