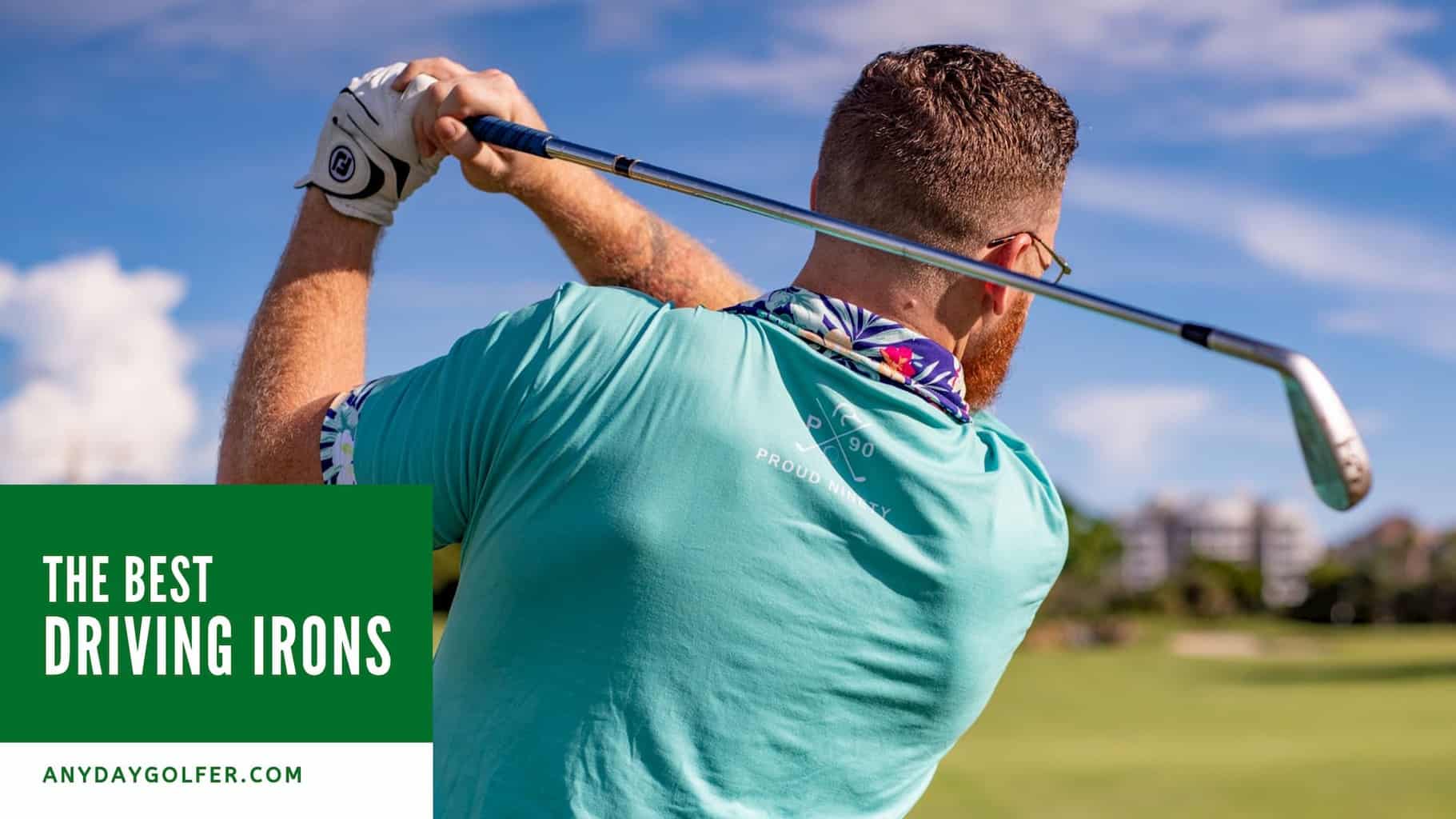 In this article, I will show you the reasons why you should try the best driving iron, instead of a fairway wood. Why? Because you can often start hitting the middle of the fairway off the Tee rather than being in the trees.

Maybe you struggle with your driver? Maybe you hit a slice or that dreaded top shot.

Well, have you ever considered using a golf driving iron instead?

I struggled with the driver for a couple of years, I never really fell in love with the driver but I loved hitting my irons. I just felt like I could get through the golf ball better and control the shot. Then when someone introduced me to the driving iron… I fell in love with it straight away. Even my bad/fat shots went further and I hit less OB during a game. ( Which is always a good thing )

So, I swapped and now I only use a driver if the fairway is wide open and forgiving.

Contents show
What is the best driving iron?
3. Cobra King Utility Iron
2. Callaway Golf X Forged Utility Iron
1. PING G400 Crossover
Why use a golf driving iron/utility iron?
What is a Driving Iron?
Can you use them off the tee?

What is the best driving iron?

We have used and tested all the golf driving irons available and these are the best ones we found online.

Cobra golf is the first manufacturer to offer adjustability on a long iron, combined with their COBRA CONNECT™ tracking system powered by Arccos, this is a fantastic club suitable for all level of players.

The engineers at Cobra have designed this utility iron with a high strength L-Cup face, creating a larger sweet zone. With a high-strength forged stainless steel face, which gives more speed and controlled distance.

100% CNC milled grooves increase spin to provide optimum trajectory, with improved control and workability to give you greater confidence to perform on the golf course. Plus feature high-density tungsten weighting around the toe area of the club head, to repositioned the center of gravity low in the clubhead for even more forgiveness, higher launches and to give a feeling of a more powerful utility iron.

Using a full hollow body construction with tungsten weighting, the irons provide an improved sound and feel, and makes it much easier to launch from any lie. Better of the tee but also easier to hit off the fairway.

This driving iron is equipped with a tracking system, powered by Arccos, and can be paired to your smartphone via a free Arccos smartphone app. This system automatically tracks your distance and accuracy of every shot, so you can review performance data, and have access to over 40,000 golf courses worldwide with GPS data.

With the Cobra King Utility they have given you eight easily adjustable MyFly8 loft settings to manage trajectory, ball flight and fine-tune the launch conditions to maximize distance on any course, and for any swing. With Smart Pad™ which keeps the clubface square, on every loft setting you choose.

This amazing driving iron/long iron from Callaway wasn’t far from coming first. It was a matter of feel and brand loyalty that made us put this golf club into second place.

Callaway has made some fantastic clubs over the many years as golf manufacturers but this driving iron is certainly one of their best.
Forged Head Design

The forged head design on this utility iron has the CG location strategically positioned in the center of the clubface, to give you increased ball speed and a long straight ball flight.

360 Cup Face technology allows the edges of the ultra-thin face to freely flex and release at impact with greater efficiency. This promotes ball speed and increases distance, especially on off-center hits.

This utility iron also features a hollow body construction to give you even more for forgiveness compared to a traditional long iron. The tungsten-infused insert increases the MOI giving you more control, easy launch and a very long carry.

This was for us, the top driving iron we tested. The accuracy off the Tee was very impressive even when we didn’t hit the center of the clubface ( Which was often ) and off the fairway the forgiveness was impressive.

It felt heavier and more substantial. It gave you the feeling that you didn’t have to hit it hard or have a fast swing speed to really hit the golf ball far. I felt very confident standing over the shots using this club.

For a club to be the best, it has to have all these features.

The Ping Crossover had all of the above and deserves to be your choice of driving iron!

PING has engineered the Crossover driving iron with a maraging steel face which is one of the most flexible and strongest alloys in the world. The increased flex at the point of impact delivers faster golf ball speed to launch shots higher and further than before. Some would even refer to this as a long iron!

The Crossover has a thinner hybrid style sole which provides better and more consistent turf interaction. Plus features a 20 gram Tungsten toe weight which increases the moment of inertia for even more forgiveness.

Whatever club you go for, a golf driving iron, hybrid or sticking to your driver, we hope you start to hit more fairways and enjoy your golf more.

Having the best equipment that suits your game is vital to getting the most out of your rounds and improving your handicap.

Why use a golf driving iron/utility iron?

In my opinion, golfers are better at using irons and similar types of clubs (instead of fairway woods) for a couple of reasons.

The best driving irons offer more forgiveness and are easier to hit both off the Tee or that shot all golfers struggle with, the dreaded second shot on a par 4-5.

Answer this one question?

Can you hit a 5-6 iron well?  If yes, then using a golf driving iron or utility club as some people call them, would definitely benefit you more than using your driver.

Modern driving irons like the PING CROSSOVER have extra weight positioned low in the head and even added mass. That pulls the CG position down and makes it easier to get the ball up into the air for a better ball flight. There will still be a lower ball flight of a driving iron, still lower than hybrid or fairway wood’s, but the shots are not pushed offline as easily and they tend to roll out further once they land.

I would always pull out my driving iron in windy conditions to hit that low, long, stinger ball. You get much more roll out than using your driver. Have you ever hit a low, good stinger shot with a driver? Apart from when you top it!

Many of the utility irons are hollow in the club face center, so when you hit the middle of the club face the area flexes more efficiently at impact and produces faster ball speeds.

Do you need another reason to throw a new driving iron in your golf bag?

What is a Driving Iron?

Unlike a fairway wood, a driving iron or utility iron is an iron used to hit the ball a long distance, usually off the tee. It has a low degree in order to help you do that.

Sometimes these irons are more of a hybrid like Ping Crossover above, which can help you reach longer distances even more.

One of the main types of players who use driving irons is a low handicap player. This is because they are not always simple to hit, compared to other clubs. However, things have changed more recently with the introduction or newer technology in clubs.

Can you use them off the tee?

Definitely, I think this is one of the best options for this type of club.

That difficult second shot off the fairway on par 4-5’s, the killer of all golfers is much easier with a utility iron. Imagine finding the fairway off the Tee with your driving iron and then you’ve 220-250 yards left in for your second shot. Using a driving iron would be a great option, you have more forgiveness and you will take a nice divot and get closer than you would with a fairway wood.

I think a driving iron is even better than hybrid as they are still longer and less forgiving clubs to use for your second shot.

Better shafts have also enabled golfers to hit better shots using these clubs, a massive improvement in recent years over the old flex shafts that needed pinpoint accuracy to use.