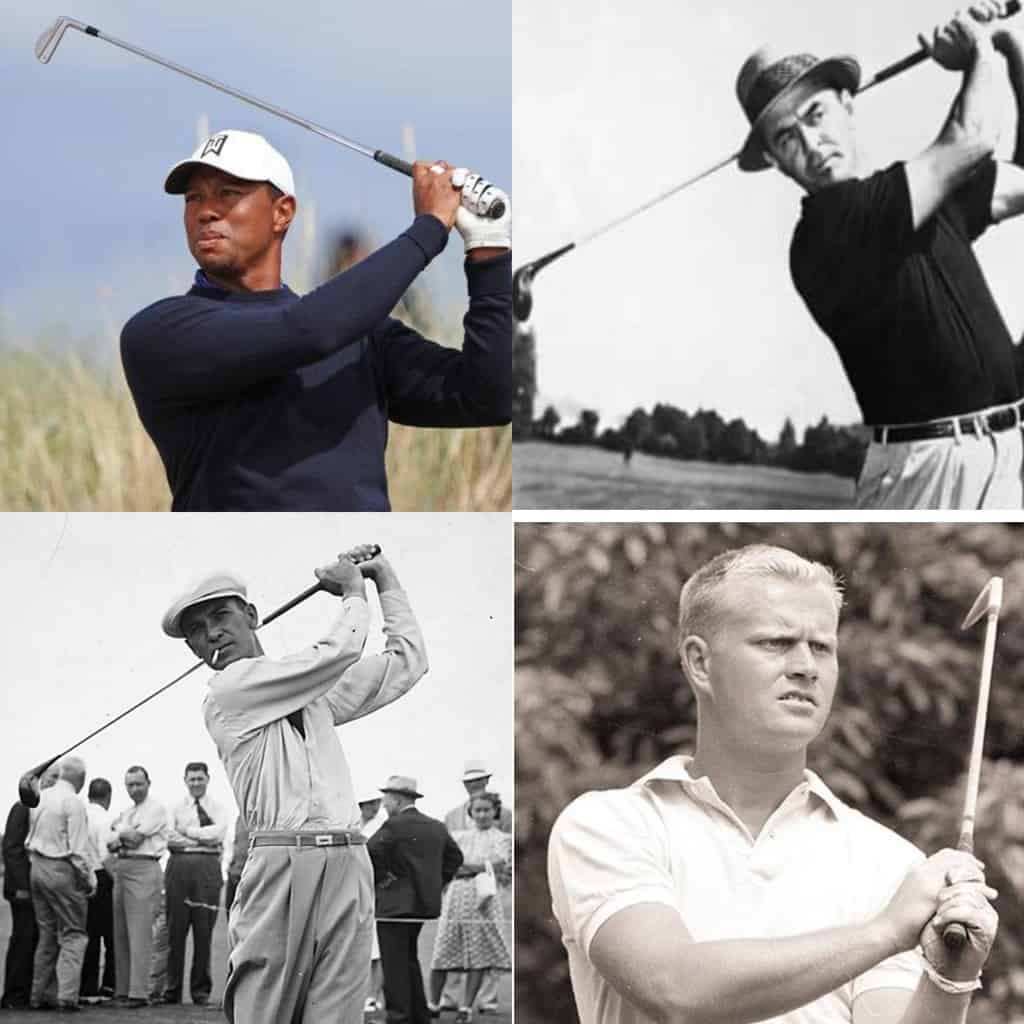 TOP 10 GOLFERS OF ALL TIME!

Over the last few decades, golf has come to fore as a widely played sport. Thanks to the masters who have brought this sport to a world stage. These great golfers from the past are a source of inspiration for several young stars. Who are golf masters of all time? Drawing up such a list is not an easy task as there were numerous stars who came and made their place in people’s heart.

The list of top 10 golfers of all time we have formulated is based on the wins, major championships, great compliments, awards and accomplishments they earned during their eras.

Jack Nicklaus tops the list with his numerous achievements. Everyone in the history of golf knows how great he was. The golden bear had been dominant over his career as he hasn’t won any big award fewer than 4 times except for British open championship that he won three times.

He had 73 victories in total. 18 of them were major championships of that time that has not been surpassed by anyone who came after. He has earned the Masters six times with the interval between the first and last victory of 23 years. Five PGA Championships and four U.S. Open titles are also included in the list.

He has set many records and earned his rightful place as a first great golfer of all time. His contribution to the sport of golf is amazing. He has also been cherished into the World Golf Hall of Fame in 1974.

There has been tough competition between ‘The Golden bear’ and Tiger Woods. Tiger being number 2 has been part of various arguments as some folks take him as number one. He transcends the game like no one before him. He gave golf that recognition that no one before him could do. With an impressive career, wood took the professional gold world to the next level.


Tiger Woods is the only player who won four consecutive majors in a row in 2000 and 2001. One of his distinguished achievements is winning 25.2% of a tournament. He earned the title of ‘PGA Player of the Year’ eleven times.

He didn’t reach World Golf Hall of Fame because he is still not fifty. He may win this as well.

Ben Hogan is often considered as the player who has the perfect golf swing in the history of golf. This player has spent more time on practices than any other player. The ones who came before have not worked on swing mechanics and technique like Ben did.

His incredible talent and success have brought him to this place. Moreover, he is known as the greatest striker of a golf ball of his time.

He was ranked 4th on the all-time PGA win list. He won nine major championships. Furthermore, he is one of a few players who earned prestigious Grand Slam of golf. He is the only player in history who won the Masters, British Open, and U.S. Open in same year i.e. 1953. There were three Vardon trophies in his collection.

He had to miss 53 PGA Championship because the dated were overlapped with The British open championship, otherwise, he would have completed the sweep.

He made his name in the first half of the 20th century. He walked off with 11 major championships wins over the period of his career. Walter Hagen, a New York resident, earned recognition when he became the only American who brought home British Open Championship.

He had become pro only at the age of 20. Now, this is called passion. With his over-the-top performance, he became the first millionaire sport’s figure. He boasted many achievements during his career that includes 75 wins in professional tournaments. He stands on 8th as the winner’s table for golfers in PGA history as he won 45 PGA tours. He won 11 major championships which place him on third after Jack Nicklaus and Tiger Woods.

Five Western Opens are also in the win-list which was considered quite a big achievement in his era. The first class into the World Golf Hall of Fame was conducted in 1974 and Walter Hagen was part of it.

Gary Player is a South African player who was also known as the Black Knight. He was named black knight because he always wore black on the course. In the history of golf, he was the most famous non-American golfer. His career extended over five decades with 165 professional wins all over the world. He earned 24 victories in PGA tour and 9 in major championships.


He won all four major titles and became one of the five members of prestigious career Grand Slam club. In 1974, he was part of the opening class of the World Golf Hall of Fame. The Black knight, winner of numerous well-deserved awards is now 80 and still lives for golf.

Regarded as one of the best bunker players of all time, due to the amount of time he spent as a young boy practicing every day from 6am-8am until he had to go to school. Gary still performs demonstrations at golfing events and still marvels this audience with his accuracy.

One of our favorite players, read his story. Book available from Amazon>> Click here!

Sam had a long and eminent career and brought seven majors wins. He was also known with the name ‘Slammin’ Sammy’. He had 82 PGA victories over his career that is quite an impressive record. He has an amazing career with three Masters Tournament wins, three PGA Championships, and one open championship.

He was runner-up four times in the US Open championship. In 1962, he won the Royal Poinciana Plaza Invitational.

He’s famous for his golfing battles with Ben Hogan which amazed everyone who watched. Oh, how we wish we could turn back time and watch these two battle it out again.

What makes booby jones different from other players on the list is that he has this successful career as an amateur. He never became pro and he was still very popular and successful. He racked up with four US Opens and three Open Championships in during his career. He won time US Amateur champion five times. In addition, he was a winner in British Amateur in 1930.

He ended his career at the age of 28. Augusta National is the course he helped to design and he remained close to the game this way. He once played in the Masters after his retirement, just on the exhibition basis.

He has been the most beloved and popular player. If the ranking was based on popularity, he would have topped the list. He was also known as ‘the King’. He had 95 professional wins during his career that includes 62 PGA Tour victories. He won seven major championships. He aced the Masters’ Championship four times. Along with this, he won two British Open championships. In 1960, he won The U.S. Open championship as well.

He brought home Vardon Trophy four times. Furthermore, he held the title of Sports Illustrated Man of the Year in 1960.

His numerous accomplishments make him stand on this list. He won the Vardon Trophy three times and is a member of World Golf Hall of Fame. During the time between the 1970’s and 1980’s, he was one dominant player in the world. According to McCormick’s World Golf Rankings, he was on the top of the list. He had total 39 PGA tour victories.

He won two masters’. A U.S. open, and five British Open titles. Unfortunately, he couldn’t hold a PGA championship. He still competes on the champion tour.

Still loved by many golfers but classed as a legend by American golfers.

Read his amazing story and learn about his swing. The Timeless swing book is available from Amazon>> Click here

He won both Masters and PGA twice. He holds the record of winning 11 tournaments in a row. He also won two consecutive AP Male Athlete of the Year Awards. His vast contributions are Golf made him earn countless awards. These awards include PGA Tour Award, Stewart Award, and Congressional Gold Medal.


In 1974, he name was included in the golf players who were welcomed in the inaugural class of the Hall of Fame of World Golf.

Byron was a master at planning the course better than everyone else he played. This gave him his advantage, this has now become a vital part of golf on Tour and some say it’s down to Byron for introduction this to golf.

Here’s a player many golfers have never heard of, Moe Norman is known for being the most consistent ball striker and one straightest hitter ever to have played the game.

Watch this video as tell us if you agree his short game was one of the best ever!

Meo’s swing and follow through was not known for its style and grace but the end result was. No one could place the ball in the same spot repeatedly as Moe could.

Despite winning more than 50 events in Canada, Norman’s peculiarity hindered his abilities in America. At one showing at the Masters, Norman had to drop out after his hands began to bleed during the round. The night before, Sam Snead had given Norman a tip, and he spent hours on the range trying to ingrain the advice into his swing.

Moe sadly died in 2004 at the age of 75. He will always be missed as one of golfs greatest characters. Golf needs more people like Meo.

John is known for two things. Drinking & Driving the golf ball, which he did best we’ll leave for you to decide. Born in California in 1966 John was obsessed with golf and took the game to a whole new level. His game was mixed with magic and horror, you never knew which John was coming to play.

His first pro victory came in the 1987 Missouri Open, he went on to win The open in 1995 but his struggle with drink and gambling started to take hold.

During the 1998 PGA Tour’s Bay Hill Invitational, which he was leading, Daly used a three-wood to hit six golf balls into the water during the final round. Daly finally got his seventh attempt over the water which was a distance of approximately 270 yards. Daly shot an 18 on the par-five sixth hole and finished the round with a score of 85

When asked why he attempted to take it over the water he replied ‘ Coz my caddy said I couldn’t do it, I showed him’ and laughed. Needless to say, it cost him the match and a large pay cheque.

Read John Autobiography, it’s one of my favorite golf books >> Available from Amazon

John is still playing today and we’re happy to say it looks like his drinking days are past him. His son now plays the game coached by his dad. His swing is just like his dads and his distance is amazing.

Let’s hope his dad shows him the correct way to live his life and we wish him all the success in the world.

Grip it and rip it!!  Little Daly.

As you can imagine there are hundreds of players that could have made it onto this list for any number of reasons. Nick Faldo would have been on this list If I had my way.

Some achievements are not recorded and won’t go down in the hall of fame but still deserve a mention and deserve to get on a list someday. Maybe we need to do a TOP 50 Golfers list?

We hope you liked our Top 10 Golfers of all time list.

Let us know who you would have added to this list.