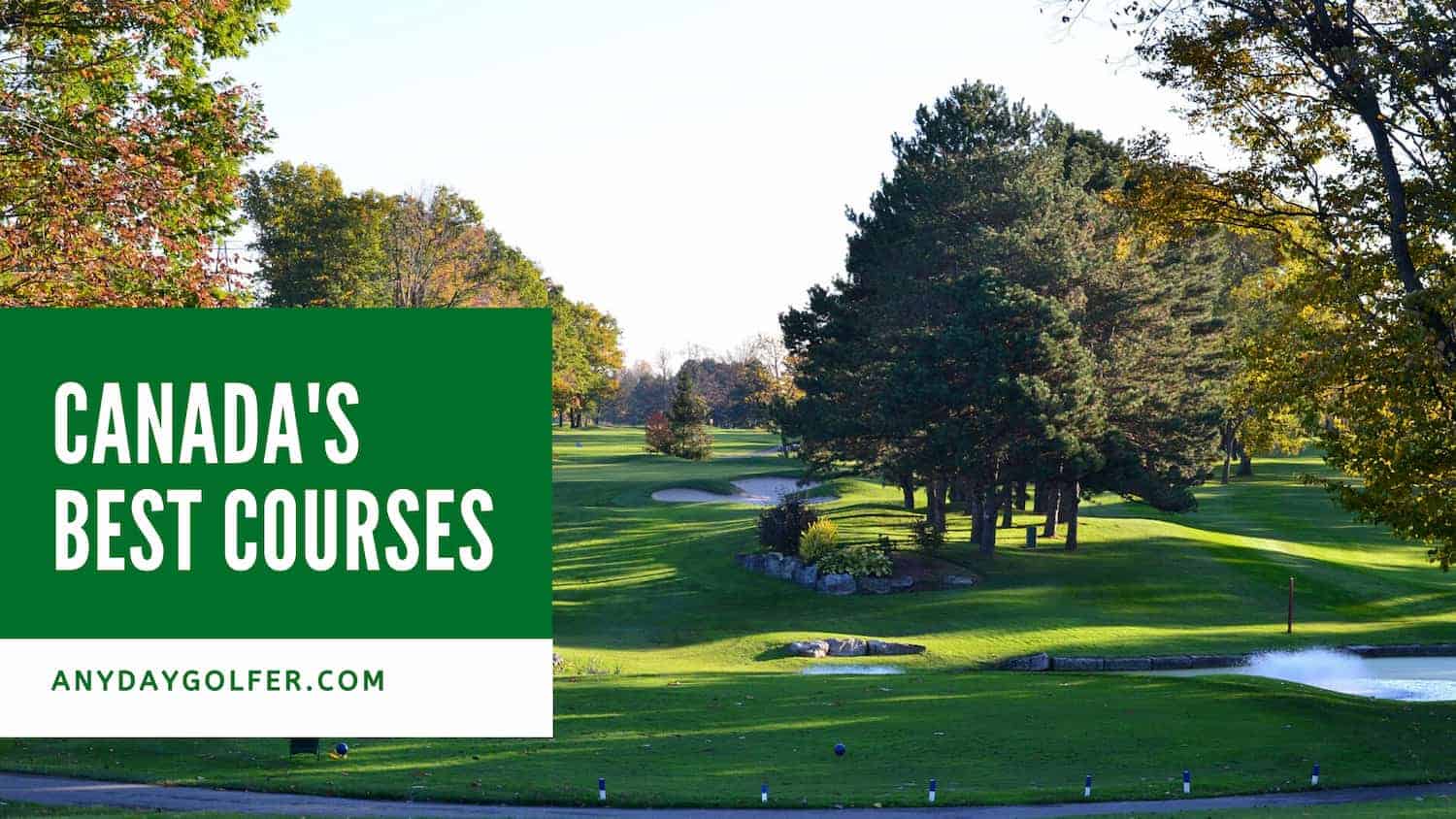 Canadians love golf. This might be surprising to you since a large chunk of the country has weather too cold to play for several months out of the year. It might be less surprising when you realize that many of the nation’s early immigrants arrived from Scotland, birthplace of the game.

In a country with roughly 38 million people, nearly one in six are golfers, according to the 2017 Golf Facilities in Canada report.

Of its more than 2,000 golf courses, a significant majority are open to the public. Yes, it gets cold in the winter. But the mild summertime temperatures make for great growing conditions. You also find some stunning scenery amongst the vast landscapes the country has to offer.

Canada truly is a golfer’s paradise, so go grab your golf clubs and head to the best courses they have to offer!

While not the first course to open in the country, Toronto Golf Club was the first championship course. Its design made it the standard for which all subsequent courses would be measured. The third oldest course in North America, the club was opened in 1876 and moved to its current location in 1911.

The Toronto Golf Club has been host to the country’s professional championship five times.

Its stellar history is not all that makes this a special place. The course features softly undulating fairways and just two par 5s, both on the back nine.

Toronto Golf Club is one of the few private clubs in Canada. It is worth introducing yourself to a member and finding a way to play this historic gem.

Since we are being nostalgic with old courses in Canada, here is the oldest golf club in Canada. Founded in 1873, Queen Victoria designated Royal Montreal as a Royal Club about a decade later. Royal Montreal is one of just 66 courses awarded that moniker.

Royal Montreal is home to three separate courses, with a total of 45 holes. Of the Blue Course, Red Course, and Dixie Course, the Blue Course is considered to be the jewel of the three.

The Blue Course is among the most difficult courses in the country, with massive greens making precision shots difficult and three-putts numerous.

Royal Montreal was host for the Presidents Cup in 2007, and has hosted 10 Canadian Open championships.

While this is a newer course, especially compared to our first two choices, Cabot Links does hold one distinction: opening in 2012 it is the first true links course in the entire country.

Located in Cape Breton, Nova Scotia, the course meanders along the coast of the Atlantic Ocean. Even short holes, such as the 14th that barely reaches 100 yards, can be difficult since they are exposed to the elements.

Another Cabot course, Cabot Cliffs joined the parade in 2015, making this a great golf destination.

Like other true links courses, Cabot Links affords the opportunity for a variety of shot shapes, including the bump-and-run that you rarely see in North America.

Located in a remote location, even by Canadian standards, Cabot Links is worth the effort.

The National Golf Club of Canada

Located in Ontario just north of Toronto is what might be the most difficult golf challenge in the entire country. The course’s website claims it is “the best pure golf experience in Canada.” That boast may be true if you are looking for an immaculate course that tests your skills.

In fact, this can honestly lay claim to being one of the most difficult courses in the world. As an example, Lee Trevino’s 67 in the 1979 Canadian Open remains the course record.

The tree-lined fairways are narrow and difficult to hit. Even if you do, you might find yourself in a funky lie with the undulating landscape. That’s where the trouble starts. It gets more difficult when you reach the greens, which are some of the best and most demanding you will find anywhere.

There is a huge negative to this course in that it is private and for men only. It does have its detractors, although you have to wonder if its restrictive policies play more into that than the course design itself.

We turn to a course that has widespread appeal. The Jasper Parks Lodge course can be difficult but it not to the point of being unplayable. It’s fair.

Located in the Rocky Mountains of Alberta, it also has stunning vistas that are alone worth the trip.

This is a resort and, as such, the golf course is hardly the only draw. The lodge is located within the Jasper National Park. It sits astride Lac Beauvert, a body of water that lives up to its name in beauty and verdancy. You are surrounded by majestic mountains and plenty of local wildlife.

With all that beauty, you shouldn’t discount the golf. The course was designed Stanley Thompson, Canada’s most famous golf architect. It looks very much the same today as it did when Thompson designed it in 1925.

A relatively recent addition to Canada’s greatest course list, Muskoka Bay opened in 2006 as part of a residential development. With a mandate to create a course within the challenging terrain, architect Doug Carrick has designed a beauty.

The area, a little more than 100 miles north of Toronto, is noted for its rocky outcroppings and wetlands. That made Carrick’s job a difficult one, but he pulled it off with a course that meanders through the valleys with stunning views.

Many of the holes feature a raised tee, which allows you to both avoid blind shots and take in the incredible views.

You need to bring your shot-making “A” game here.

This is not the oldest course in Canada, but it does have the distinction of being the oldest to remain in its original location.

This place is dripping with history, as it is host to the oldest international tournament on the continent, an annual affair with the Seattle Golf Club. It also has some fantastic views, as most of its holes have some kind of ocean views.

Victoria has a more moderate climate than much of the nation, meaning you can play here year-round.

While it has great history and a great footprint, some call this the Pebble Beach of Canada, it is not a particularly difficult course. It plays to just about 6,100 yards and to a par of 70.

You won’t find a moderate climate here as you will at Victoria, but you will find one of the more picturesque golf courses in the world.

Situated in the Bow Valley in the shadow of Mount Rundle, no hole better illustrates Banff Springs’ allure more than the par 3 4th. Known as the Devil’s Cauldron, the hole requires a shot over a mountain lake with the rocky outcropping of the mountain providing an awe-inspiring background.

This course first opened in 1911, but it was a redesign from architect Stanley Thompson that gave the course its current layout. At the time in 1928, this redesign made Banff Springs one of the most expensively built courses anywhere.

It shows, as this is a true beauty that should be on the must-see list of any avid Canadian golfer.

Some of the courses listed here can be difficult to get to, as Canada has many remote areas in one the world’s largest nations by area.

St. George’s has an advantage of those courses with its location just outside Toronto, the largest Canadian city.

You might think its location so close to large city would mean a lack of beautiful views, but that is not the case in this course, yet another design by Stanley Thompson.

This course has undulating greens that are approached by immaculate fairways. It’s a challenge, especially the four finishing holes.

Its great location and challenging layout makes this a natural fit for the Canadian Open, which is scheduled to be held here in 2020 and 2024.

As you can see, visitors and residents alike have a great deal to choose from in this country of avid golfers. The vast area means there are varied and beautiful landscapes for which to experience the game.

Canada is known as the Great White North due to its prodigious snow totals in many parts of the country. Indeed, most courses close sometime in mid-fall and don’t reopen until the middle of spring. That hardly deters the nation’s golf obsession.