Among the technological advances that have aided golfers in recent years, few can claim a greater impact on the game as rangefinders. Today’s rangefinders are engineering marvels that allow you to know with great precision just how far you have to your target.

At A Glance: Top 3 Rangefinders

Many of them also allow for slope. That is, elevation changes can affect the functional distance you are facing. Today’s rangefinders can adjust for that. Here are some of the best rangefinders with slope on the market today. 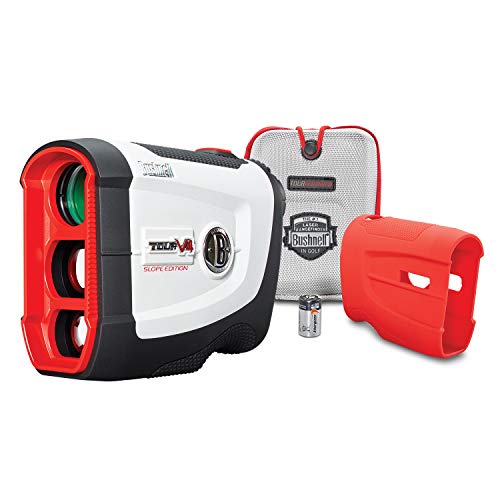 This is an all-around terrific performer from a leader in the field. It has a number of nice features.

First is the ability to switch on and off the slope function. This enables you to be in compliance with the rules during tournament play.

Second is what Bushnell calls its JOLT technology. This is a method of alerting the user when the device has locked onto its target. A series of short vibrating bursts lets you know without any doubt.

Third is the app that is included, which gives you 3D flyovers of the course and hole layouts including distances for more than 36,000 courses in 30 countries. 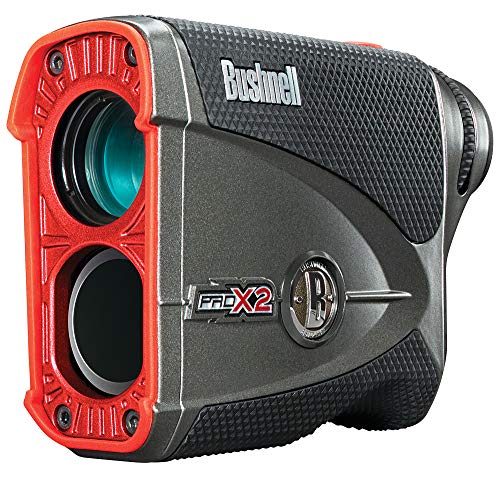 Unsurprisingly, this rangefinder has plenty in common with the Tour V4.

The slope can be turned on or off to be in compliance with tournament rules. The inclusion of JOLT technology means you get an alert in the form of vibrations that make it abundantly clear when the device has honed in on its target. And you get the phone app included with your purpose.

You may be wondering then, what’s the difference?

The Pro X2 has a dual display. At the press of a button, you can toggle between a vivid red display and sharp black display, depending on your preference. You might find one or the other superior for your needs depending on the lighting you are in.

All of that is included in a waterproof metal case. This is an excellent rangefinder that has all you need. 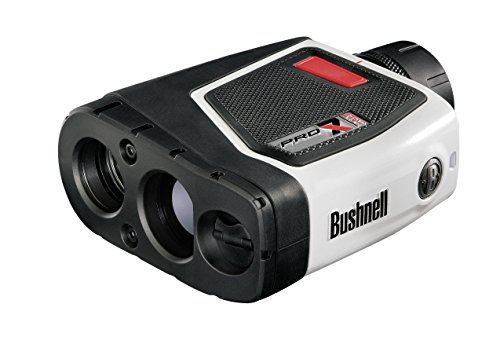 This is the third and final rangefinder included here from Bushnell. It is also the finest of the bunch.

In addition to its PinSeeker with JOLT tech that you find on other Bushnell models, you have some impressive power in your hands with this unit.

It is accurate to a half-yard, with ranges extending to at least 550 yards for a pin. It has seven times magnification and is waterproof. Little wonder that Bushnell claims this to be the most powerful rangefinder in the world.

Its second generation ESP (Extreme, Speed, Precision) technology allows the rangefinder to hone in on its target faster than ever. And the nearer your target, the more precise it gets. From inside 125 yards, Bushnell claims an accuracy to one-tenth of a yard.

The display is enhanced to improve visual clarity in low light.

It comes with a two-year warranty and a hefty price tag. You do get an awful lot of power for the price, though. 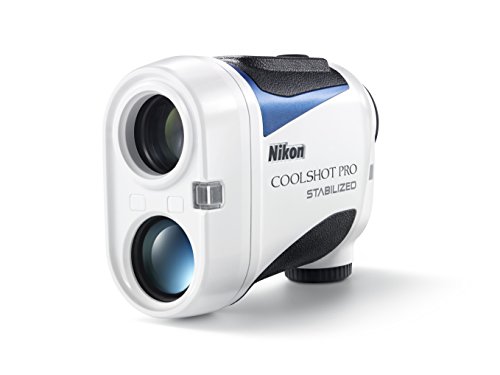 First, let’s admit that this is an expensive rangefinder, coming in at nearly $500. But you do get a beautiful piece of equipment for your money. So if you focus on value instead of price, you might find this one worth the money.

Nikon has been in business for more than century, and has used its camera expertise here to create a remarkably stable rangefinder. That stability goes beyond the viewfinder to include the outbound laser.

That stability is great for the user experience but the internals of this machine also are first-class. A background contrasted display is easy to read in even challenging lighting situations.

Continuous measurement allows you to hone in on distances for multiple objects quickly. And what Nikon calls its LOCKED-ON 2 technology provides a green circle around pins and other targets to distinguish from background objects.

Many rangefinders are waterproof, as is the Coolshot Pro, but few go so far as to be fogproof. A nitrogen-filled chamber accomplishes that feat.

There is little that escaped Nikon’s attention is this rangefinder, possibly the finest on the market. 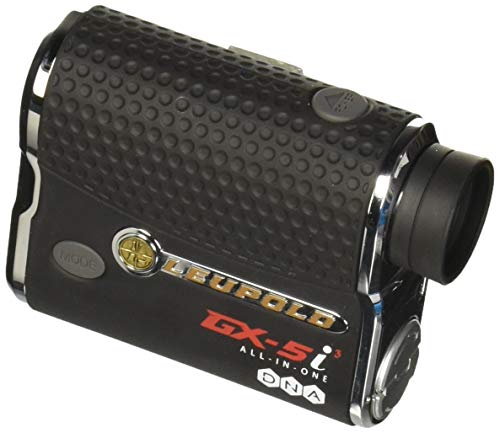 While the Nikon is fog proof, meaning the viewfinder avoids condensation on the inside, Leupold fights a different type of fog, the outside kind that can trip up a rangefinder. Leupold promises its GX 5i3 can fight right through fog to hone in on the target.

It also goes a step farther than many other rangefinders with its club recommendations. Once you enter average distances for a few of your clubs, the GX 5i3 can take that information, add in slope and other environmental factors to recommend the correct club for you. This feature is not allowed in tournament play, but it can be turned on and off.

Its Pinhunter laser technology filters out background noise, enabling the device to be even more accurate. The Prism Lock feature alerts you when the rangefinder has found its target. 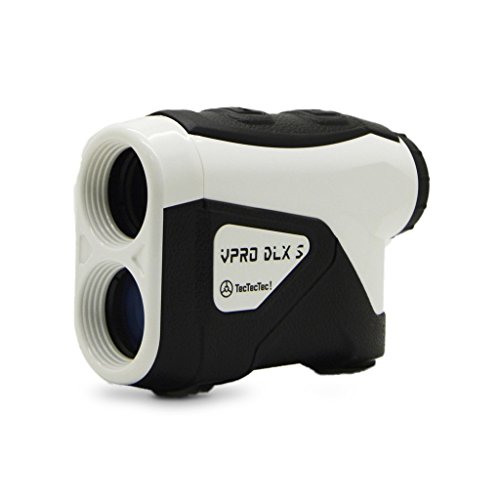 TecTecTec’s rangefinders are a bit less expensive than some of the others on this list. They can still get the job done, with perhaps a few less bells and whistles.

The VPRODLXS is accurate to within one yard and allows for multiple targets up to a range of 600 yards.

The company lists this product as “rainproof” but not waterproof. It comes with six times magnification to help you zone in on the target.

The slope function can be toggled on or off for conformity to rules. 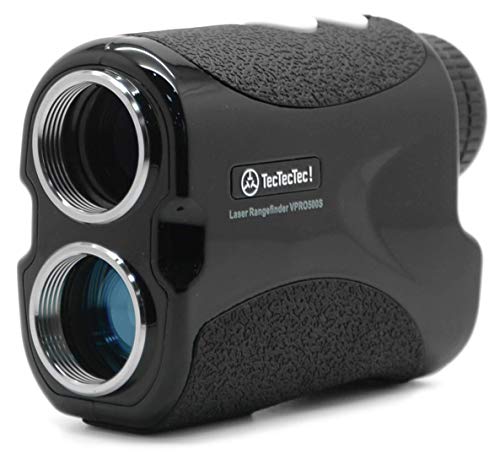 We include this rangefinder even though there are few differences between this model and the previous one from TecTecTec.

What’s the difference between the VPRO500S and the VPRODLXS? About $20 in price and about 60 yards in range.

This one is the less expensive of the two. 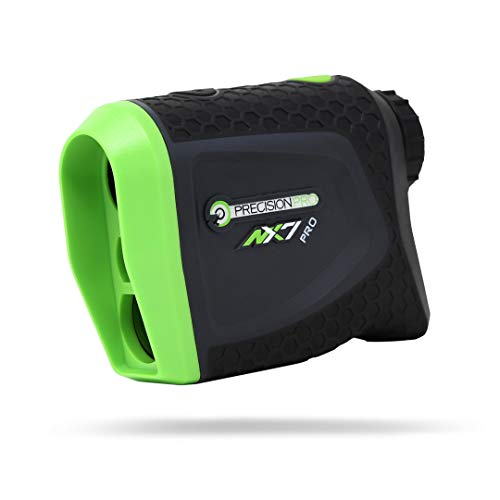 Precision’s rangefinder is a nice middle-of-the-road option. It is more affordable than some of the fancier choices, while maintaining enough functionality to get the job done.

You get a slope feature that can be turned off for tournament play. The device yields yardage results quickly with six times magnification.

Other pluses include a lifetime battery replacement, two-year warranty, and a trade-in allowance.

Now for the areas where it falls short.

The range is 400 yards, shorter than most. It is merely water-resistant, not waterproof. It is not quite as accurate as some other rangefinders.

Still, those shortcomings are hardly deal breakers for most golfers. 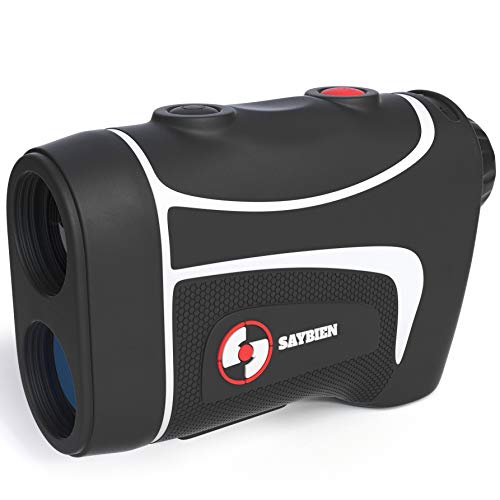 Here is another budget option that will prove to be robust enough for many golfers.

It has continuous scan mode and slope mode, which can be turned off for tournament play. It has six times magnification with a 2mm objective lense, offering a clear picture.

The body is made of durable rubber and is fairly lightweight.

The Flag Lock feature identifies the flag instead of the trees behind the green.

For many years, golfers had to rely on yardage markers in the fairway to get yardages to the pin.

For most golfers, that really doesn’t matter. For recreational play, just leave the slope function working and enjoy the modern convenience.

Aside from the slope function, most rangefinders share some aspects in common.

The range for each will vary, generally from 400 yards and up. Obviously, this is fine for your next shot, as not even the longest hitters will find targets farther away than 400 yards. Still, you might want to plan your hole by knowing the complete distance on your target line. If that’s the case, choose a rangefinder than extends up to 600 yards or so.

The display should be well lit and easy to read. You might think this is something every rangefinder manufacturer would know and follow, but there is a distinct difference between the best and the worst. Like other devices that have a display, such as a watch, condensation inside the display can be a killer.

Magnification is a personal choice, but it should be enough for you to see clearly. Most rangefinders have a magnification of six times or greater.

Most, if not all, rangefinders have some way of alerting you when the distance is figured. Typically, this will come in the form of an audio alert, such as a beep. It might otherwise be a vibration.

Stability is a big plus for a rangefinder. These are handheld devices. Some of us have steadier hands than others, but you want to have a rangefinder that will give you a helping hand. This is one area where the better rangefinders will really stand out.

The case for your rangefinder needs to be sturdy enough to handle the rigors of outdoor use. Although golf is hardly a contact sport, chances are the rangefinder will find itself being jostled about quite a bit, and even occasionally being dropped to the ground. Rubber, hard plastic, and metal can all be good choices.

Similarly, you want a device that can handle a variety of weather conditions. It should perform in both hot and cold situations. Rain, of course, can be a killer if your rangefinder is not waterproof. Be careful, since the terms waterproof and water resistant are not interchangeable.

Accuracy may not matter as much to you unless you are an excellent golfer. Some devices are accurate to within a yard, while others claim accuracy down to one-tenth of a yard. You should test the device to know that it meets your accuracy requirements.

Rarely is there such clarity when making this sort of recommendation, but the Nikon Coolshot Pro stands out above the crowd in this category.

Yes, it is more expensive than other rangefinders. But the quality you get is such that it still holds value. While awards can be deceiving, the Coolshot Pro has earned its distinctions from a variety of sources. The superior craftsmanship make this rangefinder the best in the business.

What really stands out here is the remarkable stability. Nikon has invested decades in the technology in its cameras and other equipment that it has applied here to overcome hand movements. It is likely the most accurate rangefinder on the market, so much so that it can determine a distant object within less than two yards from 1,000 yards away.

While you may never need a distance of 1,000 yards, that still indicates the quality of this machine.

It is not just stable, but fast and accurate. That helps speed up play. The Nikon Coolshot Pro is worth every penny.