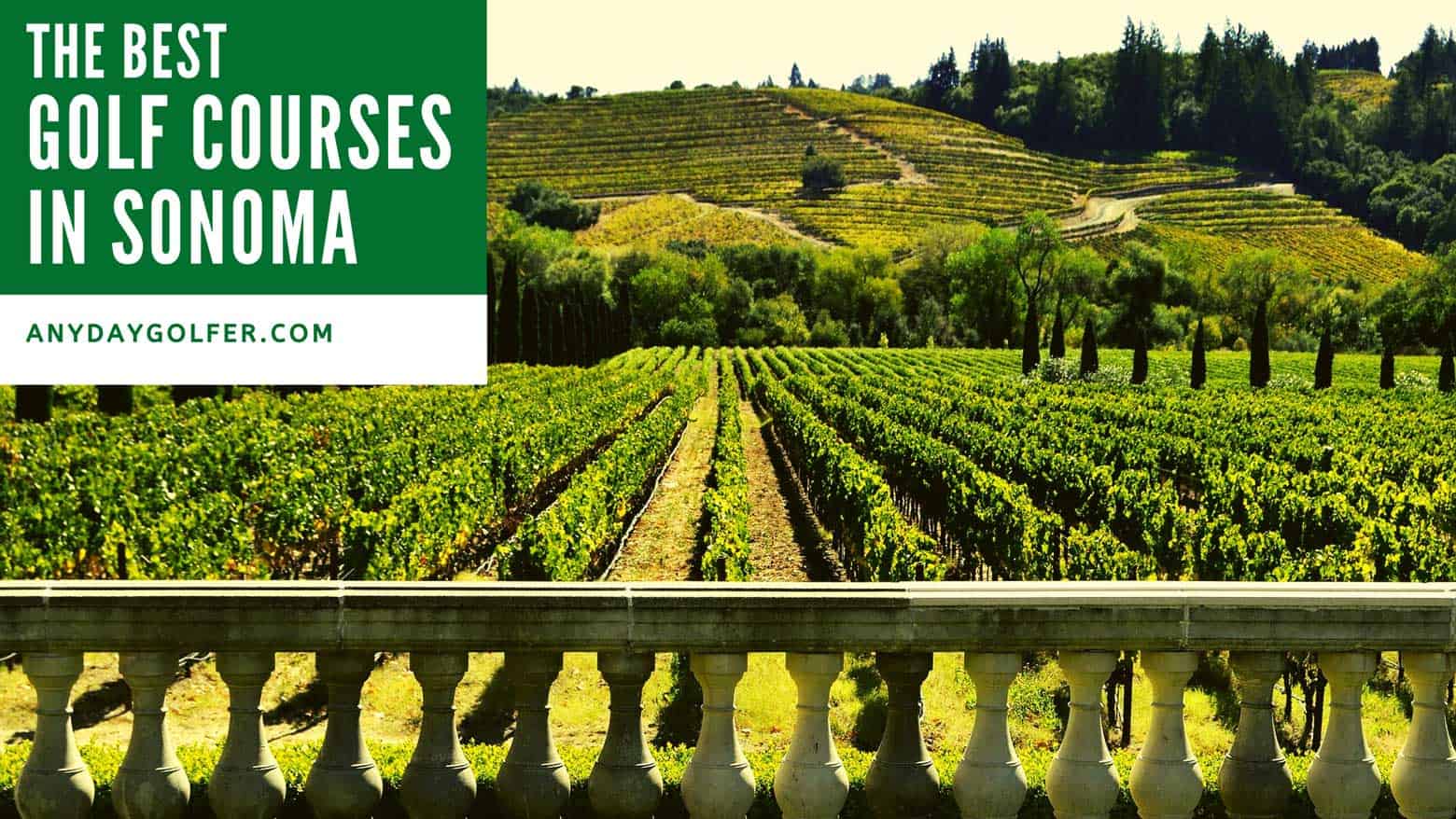 When you think of Sonoma, California, the first thing that comes to mind for most people is wine. This area just north of California near the coast has the perfect weather conditions for growing grapes. It has earned its distinction as Wine Country.

Sonoma County’s location near the coasts and mountains of Northern California make it a wine-lover’s paradise. Fortunately for golfers, this also makes for great growth conditions for golf courses. Even though the area can sometimes see 300 days of sunshine per year, the early-morning fog brings moisture that feeds the vines and grasslands.

Even in the winter months, the temperature rarely hits freezing. Golf is a year-round pursuit here. Combined with the seemingly countless wineries makes this a terrific vacation spot.

Here are some of the best places to play golf in the Sonoma area.

The Links at Bodega Harbor

This beauty winds its way around Bodega Harbor, with ocean views on every hole. This can be a difficult course, made more so by the winds that often accompany the seaside location.

The Links at Bodega Harbor is known for its environmentally friendly course management. If you stray off the fairways, you could find yourself in some gnarly rough. A light jacket or sweater is a good idea to have around, as the winds can make this feel cooler than the air temperatures.

Designed by Robert Trent Jones, Jr., and opened in 1978, the course got a complete redesign in 1008. The poa annua grass was stripped from the greens, replaced with the more player-friendly bentgrass.

Order a hot meal from the snack bar and have it waiting for you at the turn, or after the round take in a nice meal at the Bluewater Bistro restaurant.

Opened in 1981 and nestled amongst the hills of Santa Rosa, Fountaingrove offers an interesting and challenging golf experience. As you might expect from the location, Fountaingrove is known for its hilly geography, making flat lies rare, even in the fairways.

The greens, too, are undulating. Despite the challenges, this course is known for being a fair test of golf.

A wildfire destroyed the clubhouse in 2017, but the course remains open for business.

Also in Santa Rose and near Fountaingrove sits another golfing gem. Windsor has hosted professional events from the PGA’s Nationwide Tour (now Korn Ferry Tour) and is now an LPGA Tour stop. Aside from a few difficult holes, Windsor is relatively forgiving.

Windsor is known as a great spot for lessons, not stashing your bug out bag!

As is seemingly a requirement for this part of the country, Windsor also has a fine dining restaurant, Charlie’s.

Sometimes an area has a natural landscape that makes life easy for a golf architect. Rooster Run in Petaluma had three creeks running through the property and a bevy of ancient trees, but the flat terrain needed to be dealt with to turn it into a great course.

Designer Fred Bliss did just that, moving 370,000 cubic yards of dirt to transform the former pastures into a golfing oasis. With 39 fairway bunkers, six lakes, and the area’s lone island green, Rooster Run is a true challenge. It is also tremendous fun.

The aggressive redrawing of the landscape has resulted in a course that drains water better than almost any of its neighboring courses. In the wetter winter months, Rooster Run is a great choice.

Rooster Run has a fine practice facility to help you loosen up before your round.

Back to the coast for this Scottish-style links course. Robert Muir Graves designed this course, with the front nine opening in 1974. Graves was a prolific designer along the West Coast of the United States and added a second nine here in 1995.

Sea Ranch is a popular vacation spot in Sonoma County, and the golf course is a great place to spend an afternoon. You will find views both of the ocean and the redwood trees the area is famous for.

If you are in a rush to visit as many wine-tasting spots as possible but still want to squeeze in some golf, Sebastopol Golf Course may be the answer for you. An executive-style, nine-hole course, Sebastopol is right in the midst of some great wine stops.

This is a very forgiving and short course, great not just for those in a hurry but also for beginners.

Another nine-hole course, this one is a bit more challenging than Sebastopol. While not known as the best-manicured course, this one does offer some of the most spectacular views of anywhere in the region.

The great views in and around Dry Creek Valley are not the only draw. Healdsburg Golf Course has an interesting practice facility, with a tiered driving range you rarely find in the United States.

First designed in the 1920s, this is among the oldest courses in Northern California. Unlike some courses built during what is often called the golden age of golf course design, Sonoma Golf Club is still as challenging as ever.

This classic course takes a back seat to no golf course in the area. It is a beauty worth considering. The course has a number off difficult holes, while still affording the ability to score. Three of its par 3 holes can measure more than 200 yards from the back tees, while two par 5s can be reached in two with quality shots.

Like many of the courses in the area, Sonoma Golf Club has a rolling terrain set adjacent to the Mayacamas Mountains.

For seven years, Sonoma Golf Club was home to the season-ending Charles Schwab Cup Championship for the PGA Champions Tour.

With the beautiful locale and the numerous wineries, Sonoma is a fantastic vacation spot for golf and wine lovers, with courses for all skill levels.