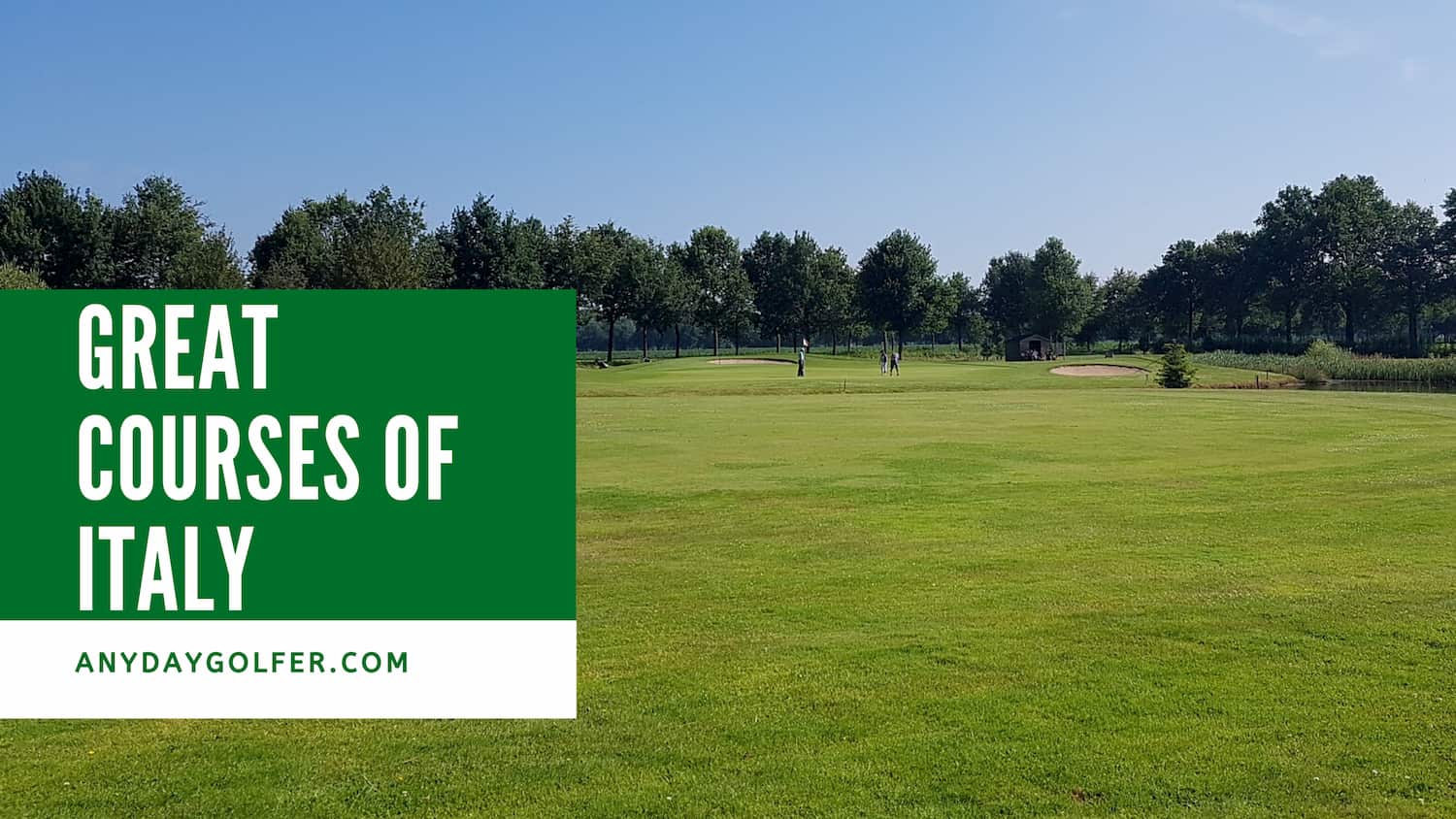 The Best Golf Courses in Italy – The game is growing here

When you think of sports in Italy, football, of course, comes to mind first. The country’s National Institute of Statistics says there are more than 4,000,000 Italians who play soccer. In fact, golf is not even among the top 10 sports for Italians.

In a nation of 60 million people, there are fewer than 100,000 registered golfers. That may begin to change thanks to a seismic professional golf victory by an Italian.

Never before had an Italian golfer won one of the four major events until Francesco Molinari won the Open Championship in 2018. The fact that he won the one major played in Europe made the win even sweeter.

Molinari’s victory was greatly celebrated among his countrymen, and it might well have started a growth spurt for Italian golf.

And while there may not be as many great golfing destinations in Italy as in some other European countries, it still has plenty to choose from in both championship and recreational play. To that end, here are some of the best golf courses in Italy.

The majority of golf courses in the country are in the northern part of Italy, and the Golf Club Milano is among the best there, located in Monza.

This was the host course for the Italian Open from 2015-2017, the most prodigious event held in the nation. Francesco Molinari himself won the 2016 event, as he and his brother Edoardo are the most famous of all Italian professionals. It was his second win at the event, and launched the period of his best play ever.

Francesco’s play has cooled just a bit recently, with his world golf ranking sitting at No. 12 at the time of this writing.

You don’t have to be a player anywhere near the caliber of Molinari to enjoy Milano, a course striking in its lush and verdant tree-lined fairways.

Although it sits in an urban setting, you wouldn’t know it, with a secluded feeling brought on by so many mature trees.

With 27 holes, this is a fine course that has been host to the national open nine times, tied for the most of any course.

Monza is typically associated with the Monza race course, but Milano offers a chance to get away from the asphalt and find some nature.

Although situated near Rome and quite a long drive away from Milano, Olgiata shares a similar park-like setting with tree-lined fairways.

Olgiata was host to the most recent Italian Open, won by Bernd Weisberger. Also like Milano, Olgiata has racing nearby, although in a different form. The course was built on a former stud farm, and horse racing still takes place just to the south.

Originally designed by C.K. Cotton and Frank Pennick, the course underwent a redesign in 2010 by Jim Fazio.

While the terrain is relatively flat, the course presents plenty of obstacles. Many of the holes feature a slight dogleg, forcing you to maneuver around the many trees. And bunkers are everywhere you look here.

Located next to Lake Montorfano and just about 40 kilometers south of famous Lake Como, Villa d’Este is a gem that has also been host to the Italian Open. In fact, Villa d’Este has been the host for the national tournament more than any other course.

It hasn’t hosted an Italian Open since 1972, though, due in large part to its short dimensions, at least by modern standards. Villa d’Este stretches for a mere 6,300 yards. Don’t let that fool you, as this is no easy course. A rare par 69 means you will be tested.

This is an older course, with many mature trees. It requires precision shot-making to get around here.

Villa d’Este is also known for its opulence, as it has been the favorite of European royalty.

A mere 4 kilometers from Rome’s city center, the location alone would make this course popular among Italians and tourists alike.

But Acquasanta has more to offer than just location.

This is Italy’s oldest golf course, but still maintains its status as a crown jewel of Italian golf.

Like Villa d’Este, this is a short course (6,429 yards) by modern standards. That means it may never again be host to the Italian Open, as it was last in 1980.

Still, it is a beauty with the views alone worth the trip. The course offers views of ancient ruins that can make you feel you have entered a time warp.

While it is a relatively short course, the fairways are tight and it can be a challenge for wayward hitters.

Argentario is a more modern resort type golf course, where you can expect to be pampered, albeit at a heavy price.

It could be worth it as the resort sits on an island in Tuscany.

The course itself is the only PGA licensed facility in the entire country. And if you are looking for coaching, the golf school here is top-notch.

The course, which opened for play in 2006, is a challenging one with water in play on several holes and is marked by small greens. This means your shot-making will be tested. And the modern design implies you will need plenty of power to boot.

The setting is remarkable, as the course sits in a natural protected area. The seaside location makes for its own microclimate that allows you to play year-round.

Known as Le Betulle by locals, Biella is in a setting unrivaled anywhere in Italy, and perhaps beyond. With alpine views, rocky outcroppings, streams, ponds, and trees, there is beauty at every turn.

And the course can be a challenge, especially if you get caught up in looking at the scenery.

With a unique par 73, Biella has a large number of holes that dogleg. You will be hitting into some of the fastest greens in the country.

Once your round is complete, head to the restaurant for a fantastic wine list and some great food.

It’s easy to fall in love with this place based on the beauty and amenities alone.

Another Tuscany course, Le Pavoniere is among the few Italian courses designed by the Arnold Palmer Design Group.

A lake and a channel that winds its way through the property make this a more difficult challenge that it might appear on first look. An island fairway on hole No. 6 is not something you see every day. This course requires precision to maneuver around.

The terrain is flat although the numerous water hazards complicate matters.

Despite the flat landscape, a large number of trees planted in recent years help make this a picturesque place. And once the trees mature, it will help play immensely.

Gardagolf features 27 holes situated near beautiful Lake Garda. The idea here was to create a classy setting with a challenging golf course to complete any holiday.

While tourists flock here, Gardagolf has also been host to a number of professional events, including the Italian Open. The aforementioned Francesco Molinari finished second in the 2018 Italian Open to Thorbjorn Olesen of Denmark.

Gardagolf was envisioned by Italian businessmen and designed by a British firm.

Although this is the last of Italian courses featured here, it is difficult to say Castelconturbia takes a back seat to any course in the nation.

There are three nine-hole courses here. The Yellow course is known for its fantastic views. The Blue course has plenty of beauty too, but is a bit more challenging. The Red course is the longest of the three and definitely the most difficult.

Still, all three nines offer up a great challenge. In fact, when Castelconturbia hosted the Italian Open, it was contested on the Yellow and Blue courses.

Perhaps the most challenging aspect here is the massive greens. This makes getting the ball close to the hole a challenge. For many golfers, just avoiding a three-putt is difficult to achieve.

Despite being a game first played centuries ago, golf didn’t arrive in Italy until the late 19th century. Its history with the game is fairly sparse, although that is beginning to change.

The Molinari brothers took home the World Cup title in 2009, a first for any Italian duo. Then Francesco finally broke through for the first major title.

And the scheduled arrival for the Ryder Cup in 2022 is sure to spark even more interest. The Ryder Cup is the biggest team event in golf and the entire golfing world will have its eyes set on Italy.

Even today, there are great courses to be found in Italy, with more possibly to come as the game grows here.