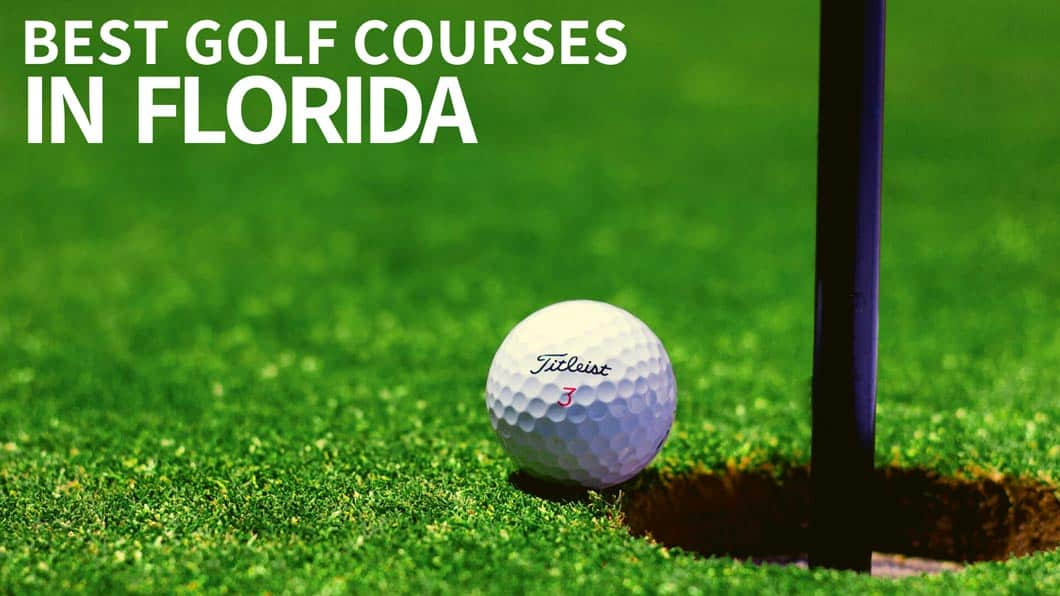 With its tropical climate and year-round play, Florida has long been a golfer’s paradise. With well over 1,000 Florida golf course, you can play great golf almost anywhere you go in this large state.

The state can be divvied up into sections. The Atlantic coast includes the World Golf Hall of Fame, the PGA Tour headquarters, and TPC Sawgrass, our No. 1 choice. Further south is the town of Jupiter, home to a large number of professional players due to its proximity to so many courses and year-round opportunities.

The Gulf Coast has some fantastic golf, too, as it is better known as a haven for retirees. The Panhandle can seem like a world away both geographically and weather-wise. It can be quite a bit cooler here than the southern part of the state in fall and winter.

And central Florida may be better known as the home of Disney, but boasts some great golf as well.

Here then are our picks as 10 of the best golf courses in Florida.

TPC Sawgrass earned its top spot here in part because of its role in the game today. Derided as a gimmick when the course first opened, the 17th hole and its island green has become iconic.

This golf course was designed with the Players Championship in mind, and that too has prompted ridicule. But the course has persevered and rightly taken its place as one of the state’s best.

Pete Dye emphasized shot-making here, with the famous island green being only one of the many holes where precision is demanded.

The three finishing holes are not for the faint of heart. The 16th is a par 5 that can be reached in two but not without peril. Water lurks down the left side. That is followed by the heart-stopping 17th, which is likely a bit easier than the finishing hole, a long par 4 dogleg left with water down the entirety of the left side.

If you can find your way onto this golf course for a round, you will almost certainly cherish the memory no matter how many balls you dunk in the drink.

Seminole sits just a few miles from Jupiter and is one of the reasons so many touring professionals live close by. You are likely to see this course as No. 1 on many Florida lists. Based purely on play, it’s difficult to argue against that.

The greens are small, undulating, and some of the fastest you will see anywhere. This is an extremely challenging course, made more so by the near-constant winds coming in off the ocean.

Originally designed by Donald Ross, Seminole was brought back to its former glory with a redesign in the 1960s. It has remained one of the best courses in Florida ever since. Indeed, it is as good as you will find anywhere.

The golf course is so exclusive it does not even have a website at this writing. If you want to play here, you will need some heavy-duty networking. It’s worth it.

Streamsong sits in a relatively remote part of the state, at least by Florida standards, east of the Tampa Bay area. It’s worth the effort to get there.

All three of its courses are listed in the top 10 in Florida as ranked by Golf Digest magazine. We’ll include all three together as one here.

The three golf courses were designed by three different design firms, and each offers unique challenges. That’s a plus, as you will get plenty of variety as you play the three. No expense was spared in the construction of the resort and that extended to the courses.

An added bonus is the fact that all three courses are open to the public, a rarity among the state’s finest tracks.

This golf course is not just designed by the world’s greatest golfer and one of its finest architects in Jack Nicklaus, it is actually adjacent to his home in Jupiter.

Nicklaus intended this to be his legacy in golf architecture and that is saying something, as the Golden Bear is responsible for some fantastic courses worldwide.

It is an exclusive club so you may have to wrangle an invite from Nicklaus to play.

You rarely even think of elevation changes in Florida, a state that has as its highest point a mere 345 feet above sea level, with that coming in the far northwestern corner of the state.

So including “mountain” in the name may be a stretch, this gem remains one of the few great Florida golf courses with natural elevation changes.

The course has been around for more than 100 years but only recently has it gotten its due. That may be due to its location in the hills of the central part of the state, a less populated area comparatively.

Another Florida golf course with elevation changes, but Calusa Pines achieved that by dynamite. Course developers were said to have spent $1 million on dynamite alone. With its pine trees and lack of water, this course almost feels out of place in the Sunshine State.

While a difficult course, Calusa Pines is even more exclusive than it is challenging. If you can manage to play it, expect a grand experience unlike other golf courses in Florida.

Concession got its name from the famous Ryder Cup moment when Jack Nicklaus conceded a tricky putt to Tony Jacklin, assuring a tie between the two clubs.

Nicklaus and Jacklin worked together to put this golf course together to memorialize that famous moment.

This is a very exclusive resort in the Bradenton area of the Gulf Coast. A true gem worth the effort it takes to get a tee time.

Find a member and butter him up to get a chance to play this beauty. Some awfully big names from golf industry, and entertainment came together to create Jupiter Hills.

Comedian and actor Bob Hope, William Ford of the Ford Motor Company, and golf architect Tom Fazio worked together to make Jupiter Hills a reality in the 1970s.

There is not a bad hole to be found here, particularly on the Hills golf course. There is 60 feet or so of elevation change at Jupiter Hills. That may seem small but not in Florida.

Another great golf club in South Florida designed by another great player, this time Greg Norman.

While the difficulty of the Medalist can be a turn off, it remains one of the best in the state.

To illustrate how exclusive this course is, Brooks Koepka wanted to get in some practice, as recounted by GQ magazine. He lives nearby and drove to Medalist.

Koepka has been the most dominant player in the world over the last several years, seemingly in contention or winning every major.

But Medalist was closed the day he visited. Koepka was turned away.

Perhaps not as famous as another Donald Trump course in Florida, the Blue Monster of Doral, Trump International is still likely a better course.

No expense was too great as tons of dirt was moved and countless trees planted to create this beauty in the West Palm Beach area.