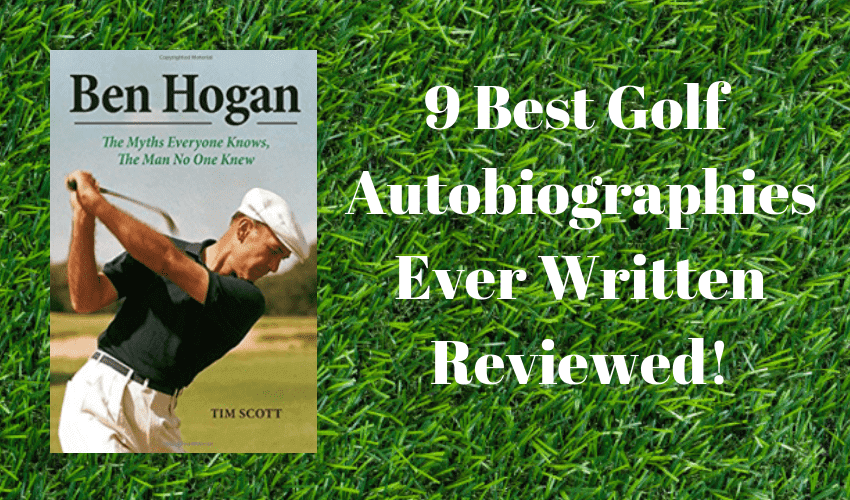 There are many people who influenced the world in different ways throughout history. The autobiographies below focus on the people who have impacted the world of golf and who inspired some of us to take up golf after watching them.

Listed below are several golfing legends from Europe, United States and the rest of the world Ranging from Ben Hogan to Sandy Lyle to Seve Ballesteros, these men are regarded as legendary in the golf world. Rightfully so as they’ve broken and set records, won numerous tournaments worldwide and left behind amazing legacies.

These high earning famous golfers are inspirations to people everywhere with their hard work, determination, and drive to succeed and become the best of their sport. These biographies chronicle the lives of the men including their highs and lows and allowing insight into the lives of these elite athletes.

Despite suffering some serious setbacks, these men have pushed forward and continued to live fulfilling lives. Each one of these men is an extraordinary and amazing role model to all. These autobiographies are truly outstanding and a must read for anyone who love golf!

Seve: The Official Autobiography by Seve Ballesteros is about the life and career of world-famous golfer Severiano “Seve” Ballesteros. Ballesteros was a Spanish golfer and a world-renowned athlete. He was born April 9th, 1957 in Pedreña, Cantabria, Spain He has many accomplishments including but, not limited to: winning over 90 international tournaments, several major championships, and the Ryder Cup.

In addition to those accomplishments, he also won 50 European Tour titles. His last professional win was the Peugeot Spanish Open of 1995. While Ballesteros stopped competing himself, he continued working in the professional golf industry as a captain and operating business designing golf courses. Unfortunately, Ballesteros was diagnosed with a brain tumor in 2008. He passed away on May 7th, 2011 of brain cancer. He was 54 years old. This autobiography is Ballesteros’ story in his own words. It details his life from the beginning in Pedreña to before his death.

No Limits: My Autobiography by Ian Poulter details the personal and professional life of Ian Poulter as told by him. Born January 10, 1976, in Hitchin, Hertfordshire, England, UK but raised in Stevenage, Poulter is a professional English golfer. He has won two World Golf Championships and was ranked number 5 in the world rankings of golf. He is also a world’s top two professional golf tours, the PGA Tour and the European Tour. His golfing career started at the tender young age of four.

From there, he started out working at a golf club to playing it professional with hard work and dedication. As well as his golf career, Poulter’s autobiography discusses his clothing line, Ian Poulter Design (IJP Design) in 2007. With almost 20 professional wins and vibrant personality, it’s not hard to see why Poulter is embraced in the golf world. Fans everywhere can appreciate this autobiography.

A Life Well Played: My Stories by Arnold Palmer is an autobiography about famous American golfer Arnold Palmer. Palmer was born September 10th, 1929 in Latrobe, Pennsylvania. Palmer has almost 100 professional wins ranging from the PGA and the European tour. He also has won 7 major championships including, 4 Master Tournament and a U.S. Open. His nickname “The King” is very fitting.

On top of his achievements in the professional golf world, Palmer also influenced the general golf community. He helped make golf accessible to the general public with him coming from a humble background. Golf stopped being an elite sport with private clubs to lower and the middle class with public courses. He is considered an American icon and an important member of golf due to his accomplishments. There’s an even a drink named in his honor. Sadly, Palmer passed away on September 25th, 2016 of heart complications while awaiting heart surgery.

Tiger Woods by Jeff Benedict and Armen Keteyian is an autobiography about legendary golfer Eldrick Tont “Tiger” Woods. Woods was born December 30th, 1975 in Cypress, California. Woods is considered to be the best golfer of all time due to his ranking in PGA tours, major championships, and that he has set numerous golf records. He’s won 15 Major Championships and 18 World Golf Championships.

He was ranked number 1 in the world rankings less than a year after being a professional golfer. This is due to him winning 3 PGA tours and the 1997 Masters. The latter of which he set a record by winning in 12 strokes. From August 1999 to September 2004, he was ranked number 1 in golf. Then again from June 2005 to October 2010, Woods again was ranked number one.  Sadly, Woods has had to take a step back from the golf world due to injuries and various personal problems. Despite that, Tiger still managed to win yet another Major by winning the Masters in 2019 which made history!

An Open Book – My Autobiography: My Story to Three Golf Victories by Darren Clarke is about professional golfer Darren Clark. Clarke was born August 14th, 1968 in Dungannon, County Tyrone, Northern Ireland. He has won 21 golf tournaments worldwide. His greatest achievement is winning the 2011 Open Championship in England, something he had been attempting to do for over 20 years. Clarke has won 2 World Golf Championships. The more notable one is a 2000 golf tournament where he defeated the legendary Tiger Woods.

Clarke was ranked top 10 in golf from 2000 to 2002 for 43 weeks. His professional wins include 14 European Tours, 3 PGA Tours, 3 Japan Golf Tours, and a few other competitions. He was also the only player to win the English Open 3 times. Despite losing his wife, Heather, to cancer in 2006, he has managed to continue a successful golf career and has even remarried.

John Daly: My Life In and Out of the Rough by John Daly is one of the better golf books around and is all about American golfer John Daly. Daly was born April 26th, 1966 in Carmicheal, California. His nickname is “Long John” because of his tee driving distance. His golfing career is quite shaky. While he’s had some great plays and won some championships, his performance is inconsistent. Daly has had 18 professional wins. He won 5 PGA Tours, 3 European Tours, as well as various other tournaments. He has also won both the PGA and The Open Championships.

Daly has suffered some losses as well, he’s been disqualified from several tournaments and numerous poor performances. While having a struggling golf career, his personal life has been chaotic as well. He’s been divorced several times, gambling addiction, and suffered from alcoholism. Daly also has a music career with 2 country albums. Fortunately for Daly, he seems to have his life on track again.

To the Fairway Born: The Autobiography by Sandy Lyle is about professional Scottish golfer Alexander Walter Barr “Sandy” Lyle. Lyle was born on February 9th, 1958 in Shrewsbury, England. With his love of golf starting at a young age, it’s no surprise he has gone on to many achievements in the golf world. He has 32 professional wins including 18 European Tours, 6 PGA Tours, and several other tournaments. He also won 2 major championships, The Open Championship, and the Masters Tournament.

Lyle was in the top 10 rankings from 1986 to 1989 for 167 weeks. In May of 2012, Lyle was initiated into the World Golf Hall of Fame. Lyle was one of the 3 golfers to be Britain’s top golfers in the 1980s. His calm demeanor and persistence earned him a spot in the hearts of golf fans. He continues to be a public avoiding controversy and coaching other golfers.

Jack Nicklaus: My Story by Jack Nicklaus is an autobiography about professional American golfer Jack William Nicklaus. Nicklaus was born January 21, 1940, in Columbus, Ohio. His nickname is The Golden Bear. Nicklaus began golfing as a child at the young age of 10. He has the third most PGA tour wins at 73 victories. He has won 18 major championships with 6 Master Tournaments, 4 U.S. Opens, and 3 Open Championships. Most people acknowledge him as the greatest golfer of all time.

In addition to golfing, Nicklaus also designs golf courses. His golf course design company is one of the biggest ones globally. He also has written numerous golf books. One of the best known to be an instructional golf manual called Golf My Way. He also has a successful golf computer game series called Jack Nicklaus with the series starting in 1988 and the latest one coming out in 2016.

Ben Hogan: A Life by James Dodson is about American golfer William Ben Hogan. Hogan was born on August 13th, 1912 in Stephenville, Texas. He has won 64 PGA Tour tournaments. He also won 9 major championships including but not limited to 4 U.S. Opens, 2 PGA Championships, and 2 Masters Tournaments. He’s tied with Gary Player for the 4th best golfer of all-time behind Jack Nicklaus, Tiger Woods, and Walter Hagen. His achievements in golf are not only in his wins but he also helped change the swing theory of golf.

Despite almost dying and then possibly having his golf career cut short, in a horrific car accident, less than a year later he was competitively playing golf again. With his passion for golf and work ethic, Hogan is beloved in the golf world. Sadly on July 25, 1997, he died in Fort Worth, Texas at 84 years old.

Bob Rotella was a coach of over 74 golf champions, both men and women, and is one of the most famous doctors in the specialty of applied sport psychology. He has a whole lot to say in writing about the subject, the people and the sport and is well worth checking out if you want to take a deeper dive into the minds of champions.

No matter which country you’re from or what golfer you like, there’s a great golf book out there to suit all. I always take a book with me when I’m on holiday and love to read and dream about some of the golf courses and places these golfers have played.

I can’t think of anything better on a long lazy summer day than to sit in the garden with a cold beer and read about my favorite golfers and their achievements.