Titleist has long been the leader in the golf ball market. So it is not surprising that the self-proclaimed “No. 1 ball in golf” would allow other manufacturers to take over the recent craze for soft golf balls.

The Titleist Tour Soft is designed to go head-to-head with others in that category, in particular Callaway’s Chrome Soft. And while the Tour Soft is definitely soft, with a compression rating said to be 65, it is quite different not just from its competitors, but from other Titleist balls currently in use.

One dramatic shift is the turn away from multiple-piece construction. Many of today’s offerings are at least three-piece, with some at four or even five. The Tour Soft is just a two-piece ball. That flies in the face of the convention that more is better in this area.

Why did Titleist do this? They did it so they could create the largest core perhaps of any ball in play today. In fact, the core of the ball is one of just two main characteristics that make the Tour Soft what it is, the other being its cover. 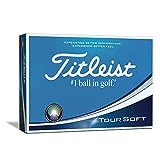 As we said, the core is very large. It is definitely the largest that Titleist has ever created. By the company’s own admission it is five percent larger than any previous Titleist ball.

It is designed to provide a penetrating ball flight and long distances, but without sacrificing control. Many softer balls are intended to have less spin. But the Tour Soft goes in a different direction

Titleist wants more spin here, meaning this may not be a ball designed for high handicappers. That added spin means better control on the greens. It also means better golfers can turn the ball from left or right as needed.

Of course, more spin can be a bane not a boon for less talented players. Those players are looking for a straighter flight. They have difficulty shaping shots, so that lack of control is a great sacrifice if it means keeping the ball in play.

Many poor golfers suffer from slow swing speeds and need the lower compression balls that fit into the “soft” category. Of course, the Tour in the name of the Tour Soft should be an indication that is not the direction Titleist went here.

In fact, the Tour Soft is quite a bit softer than its premium balls of the Pro V1 series, it remains a bit harder than other lower compression balls.

It is an interesting, if not unique, combination of high spin and low trajectory.

The high spin comes from the core of the Tour Soft, but its flight is dictated by its cover. Most balls today feature a urethane cover. Again, this is where the Tour Soft goes its own way.

Titleist uses what it calls a 4CE grafted cover that is ultra-thin. It needs to be to accommodate that large core. The company put a tremendous amount of research and development into the Tour Soft, so it is quite protective of its methods, so much so they don’t even say what 4CE stands for, other than it is some combination of four materials.

But Titleist does allow that the Tour Soft necessitated a change in the way it manufacturers the ball. Titleist makes all its balls in-house, going so far as to create its own tools and dies to do so.

The Tour Soft is so different that it required an entire new set of tools and dies at its Massachusetts-based plant to make it. One thing is for certain with any Titleist ball. You can expect it to be a consistent performer.

The penetrating ball flight of the Tour Soft comes courtesy of its dimple design. One area where Titleist is no different from its competitors is its use of needlessly complex language when talking about ball technology. A great example comes from the dimples of the Tour Soft, which is a spherically-tiled 342 cuboctahedron design. That is a mouthful.

Let’s try to put that in layman’s terms. There are 342 dimples with a design that combines triangles and squares placed next to each other on each of the dimples. You might need a magnifying glass to see that design, but you can be certain that Titleist has put forth a tremendous effort to refine it.

It seems to work, as most golfers agree it creates a low and penetrating flight.

One curious addition to the Tour Soft is its side stamp that is there to help you align putts. It has two bars perpendicular to one another. That may not be seen on any other ball and could be distracting to golfers.

The Tour Soft could be a good fit for a wide variety of skill levels, although mostly will be confined to low- and mid-handicappers. Its price indicates it is not quite a premium ball that is the Titleist Pro V1 but better than Velocity. The Tour Soft can be found somewhere between $30 and $40 U.S.

This is a bold move from Titleist. The main concern here is whether the cover will hold up. Its durability has raised concerns from a few golfers, but not very many.

You rarely see large companies that are leaders in their industry make bold moves like this one. That is both refreshing and perhaps a bit concerning. The fact that Titleist is so good at research and development, along with its manufacturing prowess, is bound to be reassuring to many.

Aside from its curious putting alignment aid, this is a quality golf ball.