When golfers hear the name TaylorMade, their first thoughts are likely to be about the company’s drivers, which have been among the game’s best in recent years. Or they might think about a nice set of irons, which TaylorMade also offers.

The last thing they will think about is golf balls, especially premium golf balls. But TaylorMade is trying to make inroads in that market. And why not? While Titleist has long had a h2 grip on the No. 1 spot among premium balls with its Pro V1 series, Chrome’s Chrome Soft has moved into second place in best sellers on Amazon in that category.

TaylorMade’s TP5 is the representative of the company’s foray into premium golf balls, or what TaylorMade calls “Tour” balls.

So what is it about the TP5 that makes it so special? First, let’s take a look at some of the ball’s technical specifications.

The TP5 is one of the few five-piece balls on the market. It has a dual-spin cover, a urethane outer layer encompassing another thin layer just inside that urethane. Inside, there are three different core materials.

Each of the four inner layers gets stiffer than the previous one. With a soft outer layer, this helps with distance off the tee without sacrificing spin on shorter shots. 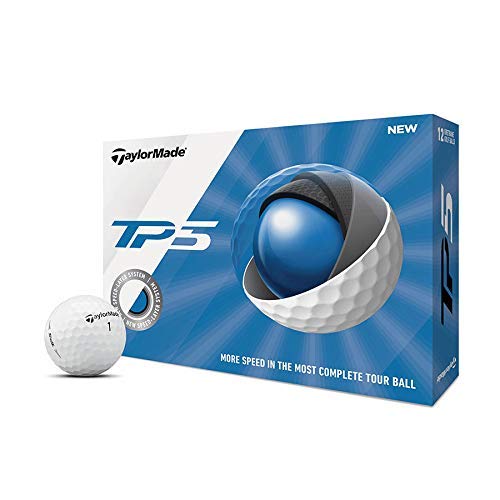 TaylorMade is a bit coy with its proprietary material it calls HFM. The idea is that HFM acts like a spring, producing the rebound effect that helps golfers get more ball speed and greater distance.

The TP5 has a compression rating of 87, which is not as hard as the Titleist Pro V1 and not as soft as Callaway Chrome Soft. It’s plenty soft enough to provide better distance off the tee without sacrificing too much feel.

All of this high-tech engineering is impressive enough to attract the attention of some of the world’s greatest players, including Dustin Johnson, Jason Day, Rory McIlroy, and Rickie Fowler. Like other top-quality balls, the TP5 has an “X” version that may appeal to low-handicappers.

But what about the weekend duffer? No doubt the price can be a turnoff. While a bit cheaper than some of its counterparts, this is still roughly double the price you pay for balls designed for less-skilled golfers.

That can sting if you are the type of player who regularly loses balls. It should be noted the TP5 is somewhat less likely to be hit off-line, reducing your lost-ball rate.

Also, strikes off the sweet spot can play havoc with the soft outer layer of any premium ball. TaylorMade has addressed that issue, but even with improvements, this ball is likely less hardy than cheaper balls.

As for mid-level players, this is a terrific choice. The ball takes off in a slightly lower trajectory that other premium balls. This could result in more distance.

There are but two reasons to not play with the TP5: if you are a very short hitter who needs a softer ball, or if you are budget-conscious.

Little wonder that these balls have made a splash both among professionals and amateurs. While it still trails the Pro V1 and Chrome Soft, the TP5 is gaining ground with a devoted following.

Now that we have the technical stuff out of the way, how does the TP5 perform on the course? 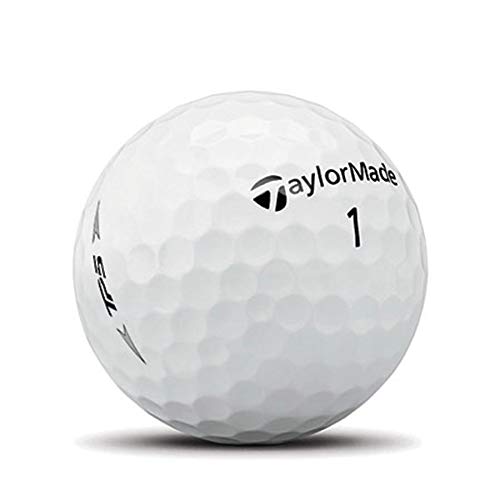 The TP5 has a middle-level spin rate, although a bit higher than the TP5X. This mid-level spin rate will help keep the ball in play without sacrificing too much in distance.

The spin rate is ideal for golfers who can swing a driver with some speed, but not quite to professional standards.

The TP5 definitely holds its own against other balls in this category, likely not the longest or shortest of the bunch.

The mid-level spin rate works wonders for longer iron shots, as it produces a penetrating ball flight. The compression rate that is softer than Pro V1 and harder than Chrome Soft is a perfect alternative for those longer shots.

The TP5 claims to have high spin rates without sacrificing distance. That is a tough task and one that any golf-ball manufacturer would love to claim. It mostly delivers.

The TP5 is every bit as good as its competitors around the greens. The spin rate on these short shots is high enough to handle even the fastest greens.

Softer balls than the TP5 can feel like putting a rolled-up pair of socks. This is not a problem for the TP5. This is one area where it might fall short of the Pro V1, though. Still, don’t let that put you off. The TP5 is plenty good on the greens.

If you are looking for tour quality golf balls, there are several outstanding choices. Titleist Pro V1, Callaway Chrome Soft, and the Bridgestone Tour B are all great choices.

TaylorMade’s TP5 takes a back seat to none of these. A well-made ball that is a great option for most players, it is little wonder that this ball has made a splash in the golf world.

Sure, poor players or beginners might be better off with a softer ball, but the large majority of golfers can put this ball into play with confidence.