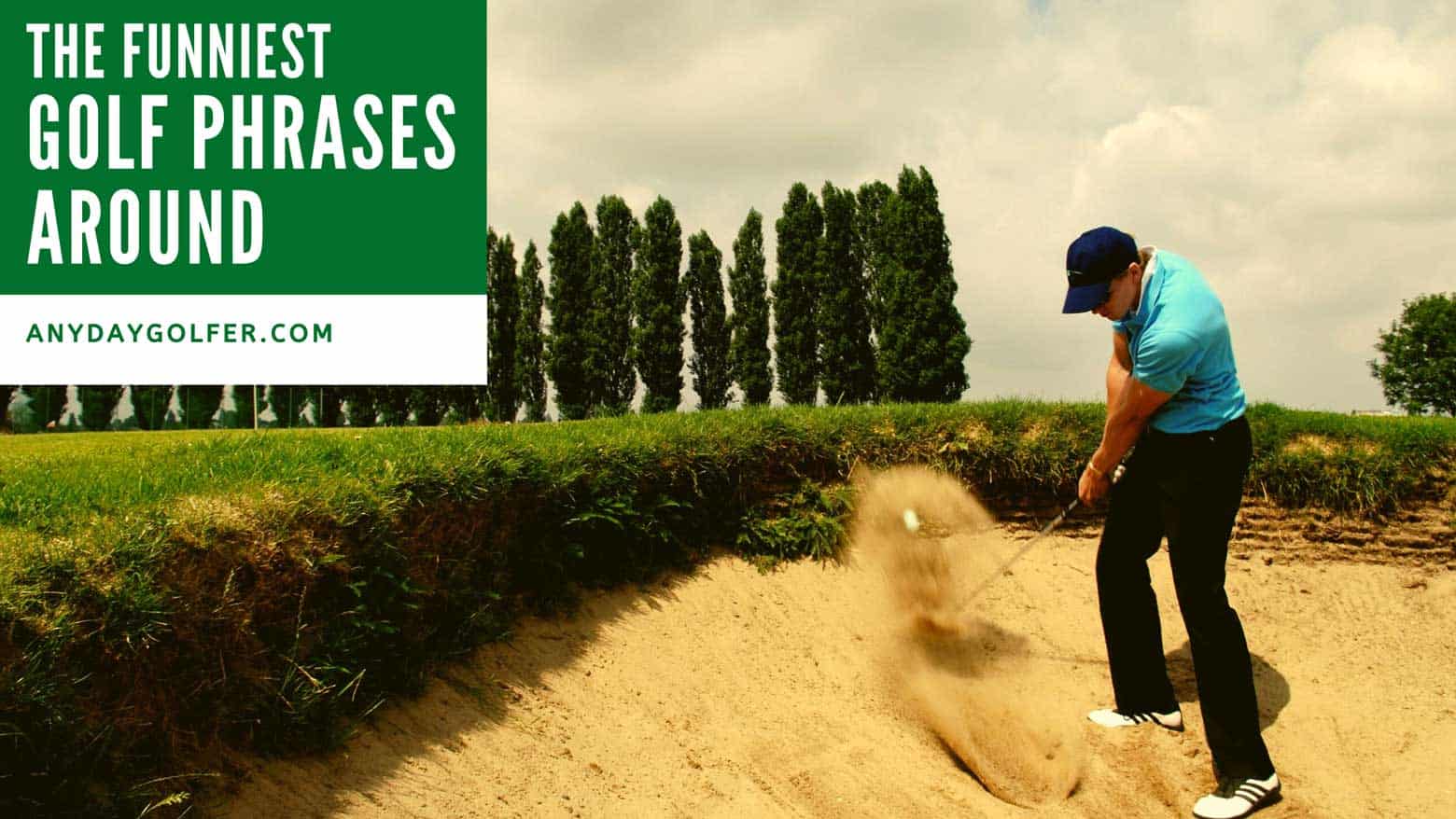 43 Funny Golf Phrases Heard On And Off The Course #9 Makes Me Laugh!

No matter which country, city or town you play in, you will always hear some strange and commonly used Golf expressions, Golf phrases and even Golf Quotes.

Some are very obvious and some are extremely vague and take some learning. In this funny and fun golf blog we’ll teach you some of the most common golf sayings to help you understand what players are saying.

The banter after a golf game in the bar afterwards is one of the best parts of golf. The more golf sayings and phrases you know will help you enjoy the game even more.

A shot that went much farther than you wanted. Often overshooting the green and going out of bounds.

A shot that goes very low and along the ground which nearly takes off the heads of worms.

The hole. The cup. The place to put your putts. When you sink a putt, you canned it.

Don’t worry you don’t have to call the emergency services 911, or 999. It simply means you’re playing well.

Shouting At The Ball “Get Up There”

A term you shout at the ball when you think you haven’t hit it far enough or used the wrong type of golf club.

A term used when you chip the ball onto the green in one putt. One chip and one putt equals up and down.

Horse Shoe Or Lip Out

A golf phrase used when the ball hits the lip of the cup spins around the lip and comes back out. These putts are very annoying. See the video example below.

In With The Snakes And Crocodiles

When you hit the ball into the deep, thick rough full of trees, bushes and god knows what else is in there. You definitely don’t want to be in there.

A phrase often used by people who can’t putt. A phrase that people say when the ball is near the hole and easily within their skills to putt it. So to save time and move on they ask for a gimme. This means they can pick it up and not have to putt it out. Remember, in a competition or tournament there is no such thing as a ‘gimme’ Every shot has to be completed until the ball is in the hole. Many golfers will ask for a gimme if they are not confident about making the putt. So, don’t always rush in and agree to a gimme.

A shot that didn’t go to plan. It can be called a lot of things like a poor shot, a bad shot or simply a duff shot.

A technical term for striking the ground too far behind the ball which produces a poor shot. This is called a FAT.

A golfer who has no clue and just swings away and hits and hopes for the best. Someone who hacks his or her way around a golf course.

As the weather worsens and gets wetter and colder, clubs will implement winter rules. These are rules that allow you more flexibility in play. There are lots of rules that get thrown out of the window when playing in winter to help you play through tough weather.

A Poor quality golf course that is not maintained correctly.

On The Dance floor

When you pitch your ball on the green it is said to have hit the dance floor.

When you don’t hit the ball well and you catch the top portion of the ball which produces a poor shot where the ball travels no distance and skims the grass without much height.

Getting Out Of Jail

When you hit a shot into a bad position and it’s almost impossible to get out of but you do. It’s said you ‘got out of jail’

A poor shot that goes nowhere, only a few feet.

That Shot Was Nuked!

When you hit the shot as good as you can and it travels as far as you can possible hit it.

Is There An Elephant Under There?

When the fairways are full of humps and bumps making it interesting but it looks like someone buried an elephant under the fairway.

When you’re playing great and you hardly ever miss a shot. Your game is at it’s best and you’re shooting low. It’s said that you are ‘In the zone’.

A nervous disorder that afflicts golfers on the green and often in their short game. They struggle to smoothly take the club or putter back and complete the shot. Often producing a poor shot or in the worst of cases, no shot at all.

Trying to work out the run of the green. Which way the ball will roll when you take your shot. This is an art form and is the key to shooting low. If you’re able to read greens well enough you will have a better chance holing putts.

When you hit your golf shot and it looks like it’s going to go further than you think. You’ll often hear golfers shouting ‘Get Down’.

When your ball hits the green – but only just. People often say it’s ‘Just On’.

Catch It Clean Or Nip It

When you perfectly hit the golf ball and hit it cleanly. Hitting ball first then grass off a tight lie. This often produces more backspin and is needed for shots in and around the green.

When you’re hitting shots that go straight towards the flag and drop in and around the hole. Those shots are classed as pin seekers.

Balls that have been recovered from lakes and ponds in and around the golf course then cleaned and re-sold. These balls are fine for beginners who don’t want to pay for new balls because they lose them too often. Read our guide and review of the best lake balls.

If you hit a bad shot and you think that you may not be able to find it or it might be out of bounds then you take a reload. Meaning you hit another shot, just in case you can’t find your first shot.

A term used when you get the driver out. Hence the meaning ‘get the big stick out’. This is the longest club in your bag.

A short putt that is almost impossible to miss is called a tap in.

This is said when a putt is not easy but not really hard. It’s just on the boarder-line and classed as a testing shot. These are never ‘Gimmes’ as previously mentioned.

When you stand at the ball ready to play your shot. That is called addressing the ball.

When your ball enters a sandy bunker with a splash and is half buried and thus resembles a fried egg.

When a player has the honor of playing first in a group.

When the group behind you has caught you up. It’s common courtesy to call them through or let them play through as it’s often called.

Another word for a water hazard.

When a newbie or beginner takes a shot and completely misses the ball.

When a player plays a shot to a certain position to gain advantage on the next shot or sometimes used to stop the ball from going too far and resting in a poor position near the green.

This term is used by golfers who feel their putts or shots should have done better. Usually by golfers who’s putt don’t break the way they thought.

Golf can be a complicated game and all the different sayings and phrases don’t make it any easier. So by learning a few of the common golf phrases, the game will be easier and more enjoyable.

Golf should be fun! Let’s never forget that. We play golf to have some banter and a chat with our mates and playing partners.

Understanding some of the lingo will only make it more fun for you.

So the next time you’re on the course use some of the golf phrases we have written above.