For years, golfers had two basic choices when it came to golf balls. One was to play the balls the pros played. That usually meant a Titleist. Second was a budget option that often felt and played like a rock.

That began to change over the last several decades. Now, thankfully, golfers of all abilities can find good performing golf balls that fit their game. This has been a boon, especially for golfers with lower swing speeds who now have a number of quality balls to choose from specifically designed for them.

Among the leaders in this new generation of golf balls has been Callaway, evidenced by the company slogan, “the ball that changed the ball.” That’s a reference to the tremendous amount of research into technologies that allow manufacturers to tailor balls to different types of swings, an innovation led by Callaway.

Today, we will compare two of the balls from the new generation, both designed for players with slower swing speeds: Callaway’s SuperSoft and Srixon’s Soft Feel. It should be obvious from the names these both are balls that are softer than normal. That is a vital part of how they function. 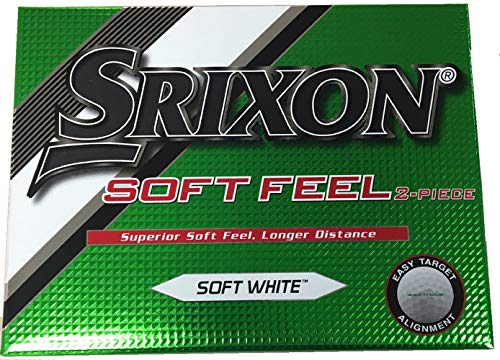 Srixon Soft Feel has a compression rate of 71. What does that mean?

Any low-compression ball like the Soft Feel will travel further but with a drawback. The lower spin rate means you will have more difficulty stopping the ball on the green on shorter shots.

The Soft Feel compensates for that by having a high launch angle. You can expect the ball to run out a bit on short shots, though.

This means the Soft Feel is a great fit for those with swing speeds on the lower end of the scale. A tour pro will swing a driver more than 110 miles per hour, on average. Low handicappers might reach 100 miles per hour or greater, while mid-handicappers generally fall around 85-95.

The Soft Feel is designed for golfers with swing speeds somewhere around 70 or below.

Another area of concern is that the low spin means a golfer will not be able to shape the ball as well as a higher compression ball. If you swing at around 70 miles per hour or below, added distance is much more desirable than shot-shaping or stopping the ball quickly on the green.

The Soft Feel has an ionomer cover, which is harder than urethane-covered high end balls. Again, not much of an issue for Srixon’s target market.

This ball also has what Srixon calls an Energetic Gradient Growth Core. That means the ball gets progressively softer the closer you get to the core.

It is a two-piece ball with a 344-dimple design intended to get the ball airborne quickly.

The Supersoft is among the softest balls on the market, coming in at an incredibly low compression rate of 38. Striking this ball can be disconcerting at first as it feels like hitting a marshmallow or a tiny pillow.

That’s true for every club in the bag and not just the driver. You will notice the low compression rate even on the green, when that can become a bit of a disadvantage.

But this ball is not designed for short-game wizards. Like the Srixon Soft Feel, Callaway’s Supersoft is intended to provide greater distance off the tee for players with slow swing speeds.

The Supersoft is a two-piece ball with an ionomer cover and a dimple pattern that promotes high and straight flight. You are not going to be able to shape this ball very well. Again, not really much of a tradeoff for players with such low swing speeds.

The cover is a new formulation from Callaway intended to be softer than most ionomer covers. It may not perform like a urethane cover, but the ball does stop better on the greens on short shots better than many balls in this category.

Players love this ball as it quickly became Callaway’s best seller upon its initial release in 2014.

The Supersoft is almost certainly the better performer from tee to green. While both balls fly straight and high with little spin, the Supersoft is likely to fare better on approach shots.

But the Soft Feel does have its advantages. For one, it is about $6 cheaper per dozen.

With its higher compression rate, the Soft Feel likely has a larger target market. If you swing a driver at more than 70 miles per hour, the Supersoft is just too soft. The performance of the ball will degenerate quickly.

What happens when a golfer with a higher speed swing strikes a Supersoft ball? Chances are the ball will balloon into the air, lacking the penetrating ball flight lower handicappers covet. Instead of greater distance, you will likely get less.

Also, the Soft Feel might be better on the green for a greater number of golfers. The Supersoft is so soft it can be difficult to get the right feel on the green. It sort of feels like the ball gets stuck on the putter face.

Regardless, these balls are a boon for low handicappers or seniors who just cannot generate the swing speeds of more youthful and athletic players. Both balls create little side spin, which means fewer slices or hooks off the tee.

And the relative lack of backspin means the ball will run out more, giving you an added distance boost.

While the Soft Feel is a bit cheaper, both of these balls are affordable, around half or less of what you would pay for a premium ball.