Artificial intelligence holds the promise of dramatic change in areas of our lives, even those in which we do not yet fathom how it could do so. Some of these areas will get less attention and have less of an impact than others.

Golf club design is one of those areas that is already being affected. That may not warrant national newscasts but we are here for the golf. It’s important to us as golfers.

Callaway is among the first manufacturers to recognize this, and among those with the resources to do something about it. One of the newest products made with the help of A.I. is the Callaway Epic Flash driver of 2019. It is a real success story that began with a request.

Manufacturers have always designed golf clubs with iterations. It’s a trial-and-error process. You make one design based on what you have learned previously, test it, and then go back to the design drawing board. It has always been both a both beneficial and slow process.

Artificial intelligence learns in the same way, with an iterative process, although it does so much faster, testing its products virtually. What might take years for an ordinary computer, and decades for a human, can be done in a matter of weeks with a supercomputer using A.I.

Brewer complied with the request of the R&D team and Callaway set its computer to work. They were stunned by the results.

The artificial intelligence used by the supercomputer at Callaway’s headquarters in Carlsbad, California, first had to learn the physics involved in how a club strikes a ball and produces the desired effect. It then had to learn how to produce a club that complied with the United States Golf Association standards. Then, it had to learn how to incorporate existing Callaway design elements such as its Jailbreak technology in the new club.

Callaway then set the computer to work. Three weeks and more than 15,000 iterations later, A.I. had produced a club head design that is asymmetrical, with waves and ripples of varying sizes and depths across the surface. That is the essence of machine learning.

While an ordinary computer would have taken 34 years to achieve the same result, it was such a radical departure that Callaway officials were taken aback. But could this unique design really be the answer? The numbers on the computer screen said so, but would it transfer to the real world?

So Callaway took the design from the virtual world into the real world, creating an actual physical club from A.I.’s design. It then tested the club, which resulted in a tiny variance in performance just 0.1 percent different from what the computer had predicted.

Here is a more in-depth look at some aspects of this driver. 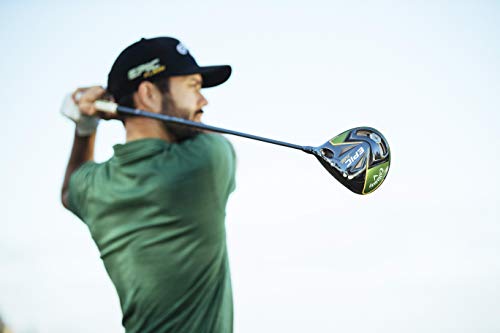 Callaway had already used its Jailbreak technology to great effect before the intervention of the super computer. It consists of two metal bars behind the club face that connect the crown and sole.

When the club face strikes the ball, the face compresses the ball as it does in other clubs. But those Jailbreak bars keep the entire club head working together. The result is a more solid club head that transfers more energy transferred into the form of ball speed.

This technology has been proven to work in the wild and not just in theory, so much so that other club makers have attempted to produce similar results, albeit using different methods.

If your competitors feel the need to copy your work, you know you have hit on something special.

The carbon fibers used to create the head of the Epic Flash driver is a new and tighter weave. This is another technological advancement. In this case, it produces an even lighter club head. That weight savings can be added back into the club elsewhere to produce the optimal low center of gravity and high moment of inertia.

Carbon fiber is an exceptionally strong and lightweight material. The T2C weave allows for the low COG that helps the golfer get the ball airborne with ease. And the high MOI is more resistant to twisting at impact, producing a more forgiving club.

Callaway used some of its weight savings from the carbon fiber to add a 16-gram weight to the bottom and rear of the club.

This weight slides along the back of the club, adjustable to wherever the user wants. The effect is to give the driver the ability to more easily hit a draw or fade on command. Keep the weight near the center for straighter shots.

While technology will no doubt advance golf club design even further in the future, the Callaway Epic Flash driver was a successful salvo in the battle for the golfing market.

The Epic Flash allows us to make a claim that would have been impossible just a handful of years earlier. This is a driver that can be used successfully for every golfer at any skill level.

Its low center of gravity makes it easier to hit. You won’t need to try to help the ball get into the air quickly. Just let the club do the work. This is good for any golfer, but especially so for a beginner or high handicapper.

Mid-handicappers and up will love the high MOI and its resulting resistance to twisting. With a more stable club, off-center hits will stray off line less. The Epic Flash has a large sweet spot that is very forgiving.

More skilled players sometimes don’t get as much consideration from club makers, as they represent a smaller market share. However, these golfers are often the most passionate and willing to spend more. Callaway has given a nod to these players with the adjustable weight in the rear of the club.

It is an intuitive design element that is easy to use and helps make this club more workable, allowing the golfer to hit a fade or draw on command.

The Callaway Epic Flash driver is a quality club using groundbreaking new technology. It is worth every penny.