In this post I am going to compare, in detail, the Callaway Chrome Soft vs Titleist Pro V1 to see which is the best of these two golf balls!

Titleist has long promoted its golf balls as the No. 1 ball in golf. In fact, every box of Titleist balls are emblazoned with that very motto. It is no idle boast.

The Titleist name came about because its inventor, a fellow by the name of Skipper Young, came up with a machine that could uniformly wind rubber strings around a rubber core. Young called the resulting ball “Titleist” because it was the winner in the race to produce the best ball. The year was 1930. Two years later, Young was manufacturing the line of Titleist balls.

A few years later, Acushnet took over the line, which quickly took over as the company’s best-selling ball. By the late 1940s, Titleist was the most popular ball among PGA professionals. And it has retained that crown.

More professional wins are done so with Titleist balls than any other brand, by a wide margin. The specific ball used for those wins today are the Titleist Pro V1 line (including V1x).

Many companies have attempted to knock Titleist off its throne and have failed. In 2000, Callaway began making golf balls and changed the ball much in the way it had earlier changed drivers with its Big Bertha line.

Callaway introduced ionomer layers and urethane covers. That is now common among many manufacturers, including Titleist, but at the time was a revelation.

Eventually, Callaway became the No. 2 seller of balls, but still far behind Titleist. In 2015, with the release of its Chrome Soft lines, Callaway has begun to eat into Titleist’s dominance. These balls have lower compression rates, making the ball softer and easier to compress. The result is a more forgiving ball.

Little wonder that Callaway began marketing these softer balls as “the ball that changed the ball.”

Those two pretty cheeky slogans illustrate the battle between golf’s top sellers. Callaway’s Chrome Soft version is the ball most comparable to Titleist’s Pro V1. Let’s see how these two titans of golf balls match up. 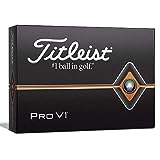 While Callaway has made a splash with its Soft line of balls. Titleist remains the industry standard for good reasons. This is a high quality golf ball. Currently on Amazon, you will find these for around $48 for a dozen.

The Titleist Pro V1 was first sold to the public in 2000. It has been the most played ball on the PGA Tour ever since, a remarkable feat that the company rightly brags about.

The goal with the Pro V1 is to produce lower spin on longer shots, like with the driver. This promotes greater distance. Of course, this has traditionally been a trade-off as low spin is a detriment to shorter shots. Pro V1 claims to produce greater spin on shorter shots.

Whether it actually produces that on short shots or not, It is definitely a softer ball than its predecessors in the Titleist family.

The Titleist Pro V1 has a three-piece construction and a thin urethane cover for greater feel. It produces a relatively low and penetrating flight, while maintaining good feel in the short game.

While the Pro V1 and its Pro V1x cousin have long shared common traits, in recent years the company has made a switch. Because it still has more dimples (352 to 328), the Pro V1 has been designed to spin less than its counterpart.

That means the Pro V1 will remain popular among both less-skilled and professional golfers.

Callaway has been open and honest about its specifications for a long time. The reason for this is obvious: Its lower compression rates are a selling point.

The Callaway Chrome Soft is not the lowest compression ball in Callaway’s arsenal, but with a compression rate of 75, it is notably lower than the Titleist Pro V1.

This translates into greater distance off the tee for less-skilled golfers than the Pro V1. The ball’s large core and thin outer layer still manages to create a soft feel around the greens, though.

There is very little difference from the Pro V1 as far as iron play is concerned, as both balls have the same urethane outer cover, the same large core, and similar ball flights.

The Callaway Chrome Soft is slightly less expensive than the Pro V1, coming in at around $44 for a dozen.

The low spin rate, four-piece construction, and soft feel are all appealing to weekend duffers and better players alike. Little wonder that Callaway has cut into Titleist’s lead in market share.

Callaway continues to tinker with its winning formula, recently adding graphene to its Dual SoftFace rubber core. The company says this change allowed them to make an even thinner outer urethane layer, further softening the feel around the greens.

According to Golf Data Tech, a company that reports on different aspects of the game, golfers are more and more turning to the urethane covers, since they grab the grooves on iron shots, producing better stopping power than Surlyn covers.

Chrome Soft vs Pro V1 – Which is the Best?

Which golf ball among these two titans should you play? It depends. There are many similarities between the two, with two main differences.

First, the Pro V1 is a three-piece ball, while the Chrome Soft is four-piece construction. Second, Pro V1 has a higher compression rate, 90 to 75, than the Chrome Soft. Both these differences manifest themselves in two places on the course, off the tee and on the green.

Better players with higher swing speeds might prefer the Pro V1 in both spots. The Chrome Soft might be too soft on the greens for these better players. Some might feel like it is hitting a round sponge.

Lesser-talented players and those with slower swing speeds could see a rise in distance off the tee with the Chrome Soft. Which is not bad for a short game. And, if you are not bothered by the incredibly soft feel on the green, the Chrome Soft might also be a better choice.

Regardless, you should give both balls a try. These are two of the best balls on the market, with their large sales numbers proving that. Pick the one that feels best for you.