Long putters have been around for decades in golf, but beginning sometime in the 1980s, they really took off. Players were able to anchor the butt end of the club on some body part. First, it was either anchored against the chin or chest. Later on, belly putters came on the scene.

The idea was the same: Create an anchor point that allows for a more stable stroke. It did not take long for a fierce debate to take place. Is this fair? Should it be legal? Does it give any advantage at all?

After many years of this debate, the arbiters of golf rules in both Europe and the United States decided the answers were no, no, and yes. In late 2012, a rule was proposed banning the anchoring of any club. That rule eventually passed and was implemented at the beginning of 2016. This spurred an unintended consequence we are seeing more and more: the increased usage of counter balanced putters.

At A Glance: Top 2 Counterbalance Putters

A counterbalance putter is one that has weight added to the butt end to compensate for a heavier head. These putters are often longer than their regular counterparts. As with anchoring, there is a great deal of debate as to whether this is an advantage or not. If you feel like this kind of putter could be good for you, we are here to help. Here is a collection of some off the best counter balanced putters on the market today. 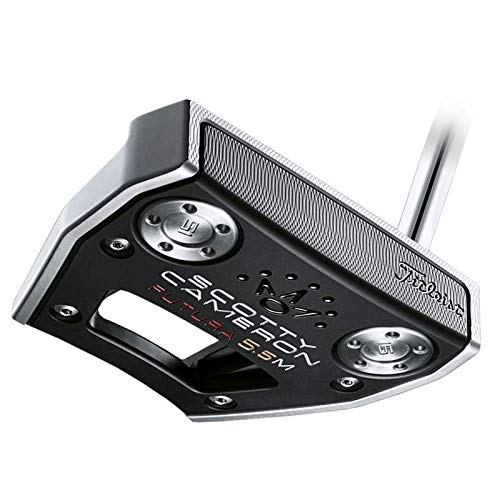 We include this putter because the similar X7M model can be out of many golfer’s price range. Not that this is inexpensive. No Scotty Cameron putter is. There’s a solid reason for this.

These counterbalance putters are unsurpassed for both performance and design.

The head is a premium design with 303 stainless steel and a 6061 aircraft aluminum face.

These are gorgeous putters. Putt one in your bag and watch your friends salivate. 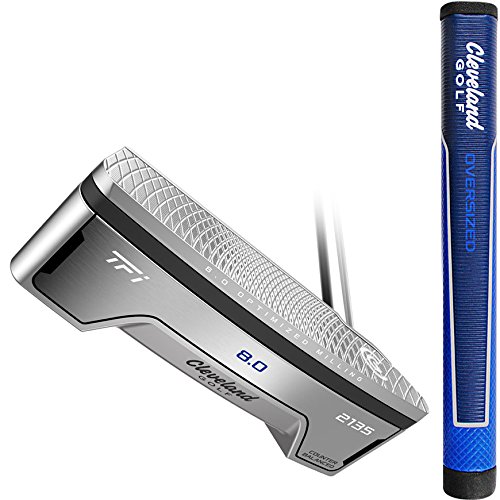 You can find better performing putters on the market, but few offer the stability in a blade putter that this one offers. And there are almost no putters that can compete with this one in the price range.

You can get the Satin 8.0 in both 35 inches and 38 inches. Unless you are used to the longer putter, the shorter length might be the better choice.

The milled face doesn’t exactly steal from Bettinardi, but it looks and performs similarly. This putter is quite easy to align. If it’s feel you are looking for, this is probably not the putter for you.

But many golfers could easily slide this into their bag and improve their putting, and not just high handicappers. 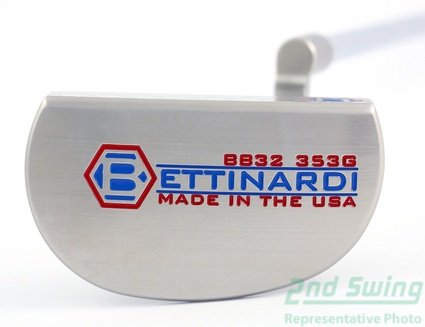 Robert Bettinardi made his mark on the game with his milled putters, a rarity in the early 1990s that soon became commonplace.

Bettinardi has never been afraid to color outside the lines in his putter designs, and the BB32 from a few years back is no different.

This is a mid-size mallet putter with great forgiveness due to its heel-to-toe weighting. What makes it mid-sized is the half-moon shape of the head. That may take a bit of getting used to, but a white alignment mark makes lining up your putts a breeze.

It is nearly impossible to hit a putt off your target line with this beauty. The ball rolls off the club face almost immediately, a key to making more putts. 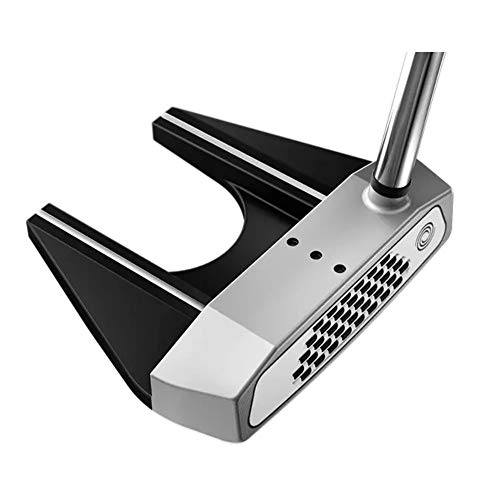 Odyssey went all out to redistribute the weight of this putter to both ends. While it might be tempting for manufacturers to merely add weight to both ends, Odyssey has saved weight with its hybrid graphite and steel shaft, coming in 40 grams lighter.

That shaft is stiffer than normal to allow for the counterbalanced weight. It remains stable with a low MOI that helps get the ball rolling immediately and on target.

And it features Odyssey’s White Hot insert technology that further increases the immediate roll off the face.

There are options aplenty so be careful when ordering to make sure you get what you want. 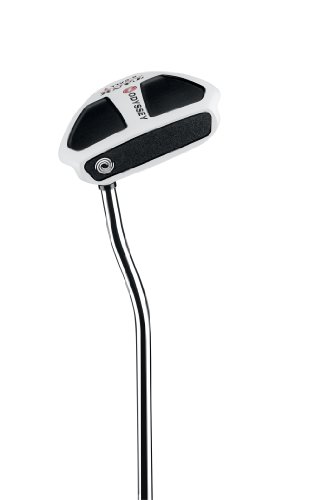 This counterbalanced putter from Odyssey is quite different from the Stroke Lab. This has a more traditional method of getting that counterbalance, adding weight to both the head and the grip.

The 400 gram weight of the head and 150 grams in the shaft result in a putter weighing 19 percent more. That’s quite a bit, but won’t feel odd to golfers who have grown use to heavier putters.

That extra weight in the head also gives a much higher MOI that your normal putter.

A striking and heavily contrasted head helps with alignment.

“Tank” might well be appropriate as that’s about how much feel you get. But it is an incredibly stable putter that will get your putts rolling on their line almost every time. 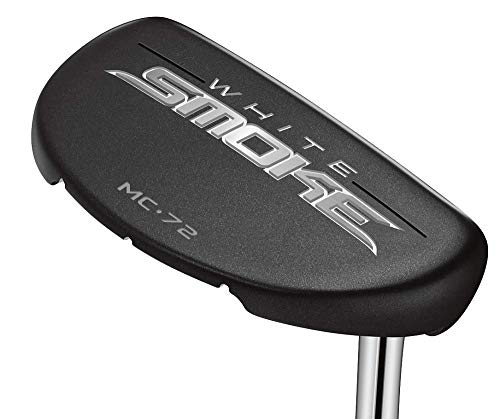 With the black head and white insert on the face, the contrast in this counterbalance putter is striking.

Another striking feature is the 15-inch, 130-gram grip that provides the counterbalance for this entry from TaylorMade.

Like others in this category, the White Smoke MC-72 is very stable. The ball rolls effortlessly off the Pure Roll Surlyn face insert.

If you struggle with three-putts, this could be a good answer for you, as it seems to perform well on longer putts. You might pay for that with fewer makes from short-range, however, as the feel is poor here. 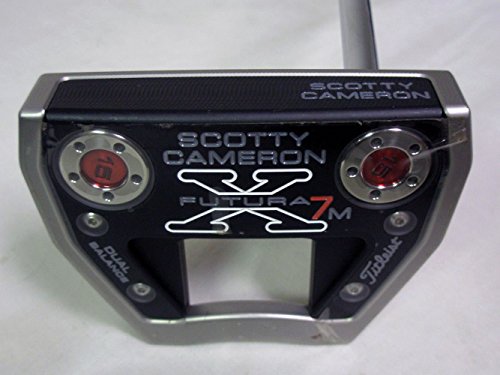 Speaking of high prices, this version of the Scotty Cameron can be difficult to find. Combine that with the superior design quality and you could easily spend more than $1,000 on this putter.

But if price is no object, this could be the putter for you.

This is a high MOI putter with a barback mallet design. It also has the same combination of steel and aluminum materials in the head as does the 5.5M version listed above.

A vibration dampening material placed between the steel and aluminum lends greater feel than you might expect in a putter in this category. 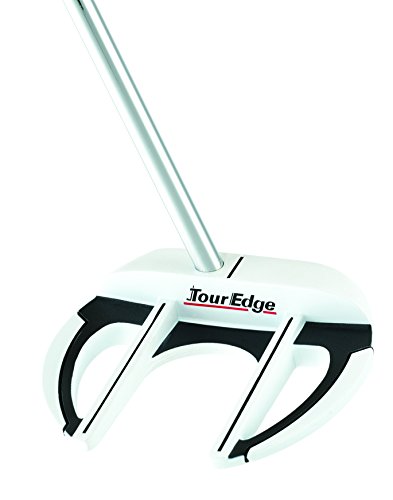 This putter does not have nearly the type of engineering or construction you get from the Scotty Cameron putters. However, that does not mean there is nothing to like.

A face insert that has tiny grooves helps get the ball rolling immediately. And an oversized grip helps avoid breaking wrists that can cause havoc with your putts.

This is more of a budget option so you might expect it to have a lower price.

What is the basis for the claims these putters help the stroke? It all boils down to the moment of inertia, hereafter referred to as MOI. With its weight distributed in greater amounts on both ends of the club, counterbalance putters have a lower MOI.

This lower MOI helps create more balance in the stroke. It is difficult NOT to have a pendulum-type stroke with this type of putter. That kind of stroke has long been recognized as most efficient.

Is there proof of this? Well, MOI can be measured but beyond that, it is unlikely you will have definitive proof that a counterbalance putter performs better than standard putters.

The answer likely depends on your personal needs. If you feel more comfortable with a counterbalance putter, there is a good chance your performance will follow.

If you among the group of golfers who previously used an anchor putter, at the very least you should try a counterbalance putter.

Both these putters come from respected names in the industry and are highly engineered for premium performance. No doubt the Scotty Cameron putter is better constructed but it can come with a costly sticker price. The Cleveland putter is a fantastic putter for the price.